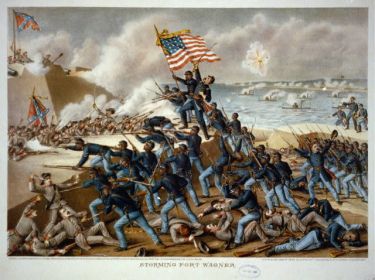 Today in Charleston, South Carolina some 10,000 mostly black persons, of whom Baptists are predominant, gather in the city’s Hampton Park in what becomes America’s first Memorial Day observance, also known as Decoration Day.

Among the crowd are church leaders, women’s organizations and freedmen. All gather to honor the fallen Union soldiers whose death brought freedom to the South, 257 of whom had perished in the city’s former Confederate prison camp.

The day begins with a parade on the grounds of Charleston’s former horse racing track. On this site symbolic of the wealth of antebellum and war era planters, the 10,000 participants parade, led by 3,000 black schoolchildren carrying roses and singing “John Brown’s Body.” The crowd then gathers around a newly-created cemetery housing the remains of the 257 Union soldiers who died as prisoners of war in Charleston, where a children’s choir sings “We’ll Rally Around the Flag” and “The Star-Spangled Banner.” Spiritual tunes and scripture reading follow, after which the crowd fans out for picnics, speeches and military drills, including by the 54th Massachusetts Colored Regiment and the 34th and 104th U.S. Colored Infantry regiments.

Many native white Charlestonians, of course, evidence no appreciation of the day’s ceremonies.

While black Charlestonians and some of the city’s whites remember fallen Union soldiers and celebrate freedom, Abraham Lincoln‘s body arrives in Chicago, where it is viewed by some 100,000 persons.