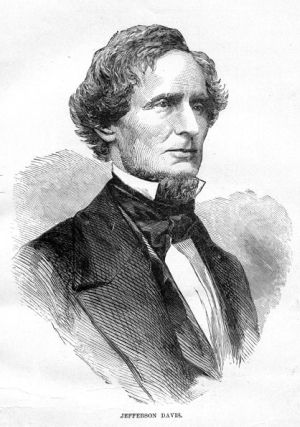 On display in Chicago this day, Lincoln‘s body is viewed by some 125,000 mourners.

In this the third week following Lincoln’s assassination and the fourth following the Confederate General Robert E. Lee‘s surrender of his Army of Northern Virginia, late in the afternoon in Abbeville, South Carolina former Confederate president Jefferson Davis presides over his last meeting with his war cabinet.

Davis’ efforts to convince Secretary of War John C. Breckinridge and several military officers present to continue armed resistance fall upon deaf ears. The former executive, realizing his efforts are futile, has no choice but to acquiesce to the wishes of his cabinet. In quiet, anti-climatic fashion the Confederates States of America thus comes to an official end as Davis, cabinet members and a force of 3,000 soldiers who had been guarding the president disperse and go their separate ways.

Davis and a small contingent head south into Georgia, the former president planning to flee southwestward and perhaps into Mexico. Unbeknownst to him, U.S. President Andrew Johnson issues a proclamation for his arrest, offering $100,000 reward for his capture.

This same day Virginia native and Primitive Baptist layman Isaac Webb (1833-1913), soldiering in the Confederate’s 63rd Virginia and later promoted as 1st Lieutenant of the 54th Virginia, surrenders at Greensboro, North Carolina. After the war Webb is ordained as a Baptist minister, pastoring eleven churches during the remainder of his life.