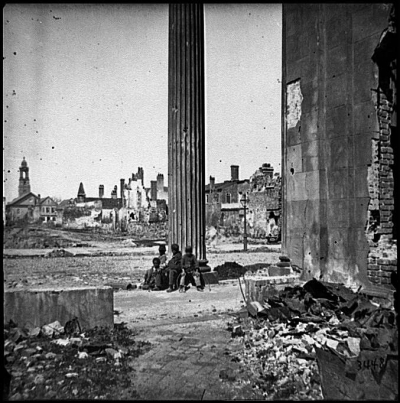 Charleston, after the surrender

The reconstruction of Charleston, South Carolina is well under way nearly three months following the February 18 surrender of the city to Union forces.

Prior to the fall of Charleston to the Federals, a number of black Baptist congregations were organized in Union-controlled areas of the South Carolina coast. Today, a “Negro Baptist” church is formally established in Charleston proper.

Seventy-three “God-fearing Christians of African descent” gather in a “two-room building on Morris Street” and form the Morris Street Baptist Church. Many are former slaves, only recently freed. Jacob Legare leads the group in the founding of the church, which is among the earliest African-American churches created in the state of South Carolina following the end of the Civil War.

Also this day Confederate Lieutenant General Nathan Bedford Forrest, a forceful and controversial cavalry leader earlier charged with the slaughter of surrendering black Union troops, lays down his weapons and surrenders at Gainesville, Alabama. After the war Forrest becomes a leading advocate of the southern Lost Cause and serves as the first Grand Wizard of the Ku Klux Klan, an organization that utilizes fear to suppress the advancement of blacks in society and politics.

Black Baptist communities, such as the Morris Street church, help persecuted post-war black Baptists of the South persevere and even thrive. The Morris Street Baptist Church remains to the present day, a vibrant witness in the city of Charleston.