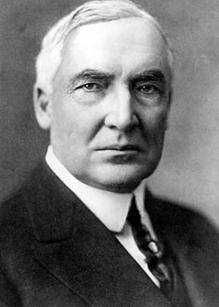 Today on a farm near Corsica (now Blooming Grove), Ohio a son is born to staunch Baptist parents, the father a farmer and veteran of the Civil War.

Growing up in the late decades of the century, Warren G. Harding becomes a newspaperman, following in his father’s footsteps (in addition to farming and a medical practice, George Harding also was part owner of a local newspaper). He also chooses the faith of his family, remaining active in local Baptist life during his adult years.

In 1898 Harding enters politics, winning a U.S. Senate seat from Ohio. Two decades of political service follow, culminating in Harding’s election, as a Republican, as the first Baptist president of the United States in 1920. He is also the first president born after the Civil War.

It falls upon Harding to lead the way in formally ending the Great War (World War I) and pointing America forward in a post-war recession.

While in office, Harding dies unexpectedly of a heart attack, the sixth president to befall such a fate.

The Rev. Dr. William S. Abernathy, pastor of Calvary Church, and Mr. Harding were close personal friends. It was Dr. Abernathy who, on invitation of the President, offered the opening prayer at the Conference on the Limitation of Armament. This prayer subsequently provoked criticism because it did not contain the name of Christ.

Mr. Harding’s Marion pastor died on July 20, last. He was the Rev. Dr. Thomas H. McAfee. Because of ill-health he was pastor emeritus. When Dr. McAfee was stricken Mr. Harding came forward and pledged the salary of a new pastor so that Dr. McAfee might retain the title and receive compensation. This Mr. Harding continued to pay. Dr. McAfee was stricken in July, 1920, only a few days before he was to have taken part in the ceremonies in which Mr. Harding was officially notified of his candidacy. The pastor never recovered.

Recently the third congress of the Baptist World Alliance in Stockholm, Sweden, sent a message of greeting “To the President of the United States, his Excellency, Warren G. Harding.”

The Northern Baptist Convention was to have met last June in Washington, that city being chosen because the President was a Baptist, and Mr. Harding was to have delivered an address to it. The convention voted a year ago in Indianapolis to meet the following June in Washington. This was on the invitation of Dr. Abernathy. But the hall in which the convention was to have been held could not be finished in time, and late in the year the meeting place was switched to Atlantic City.

President Harding had accepted an invitation to preside at the World Conference on Faith and Order which is scheduled to be held in Washington, probably in May, 1925. Bishop William T. Manning was one of those who issued the invitation.

Mr. Harding numbered many clergymen of different denominations among his intimate friends. One of these was Bishop William F. Anderson, resident Methodist Bishop in Cincinnati.