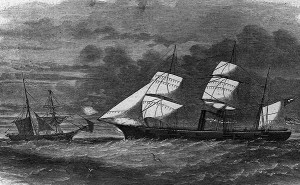 A ship chartered by the American Colonization Society sails out of Baltimore with 172 freedmen from the Lynchburg, Virginia area, many who are of “the Baptist persuasion, one of the latter being a preacher.” A number of skilled persons are among those who embark. The destination is Carysburg, in the interior of Liberia.

The leaders of Colonization Society believe that the transplantation of American blacks to Africa remains a proper solution to racial problems in America. Few black citizens, however, share their convictions. The 172 sailing this day do not represent the majority; most consider themselves Americans and now hope that their nation will finally grant them the freedoms and equality enshrined in the U.S. Constitution.

Meanwhile on the West Coast, a reader of the San Fransisco Dramatic Chronicle criticizes a local newspaper columnist, Mark Twain, for writing a bad review of the opera singer Elvira Brambilla.

“That irreverent joker, Mark Twain, in his last letter to the Virginia Enterprise, blasphemously alludes to the queenly Brambilla as “the preposterously stuck-up screamer who was petted by audiences in San Francisco until she began to imagine she was the bass vocalist of Christendom.” Mark was brought up in the country, and his musical education was limited to a course of instruction on the jews harp, by the son of the village poundkeeper. Hence his lack of taste. Still, we think that something ought to be done to him.”