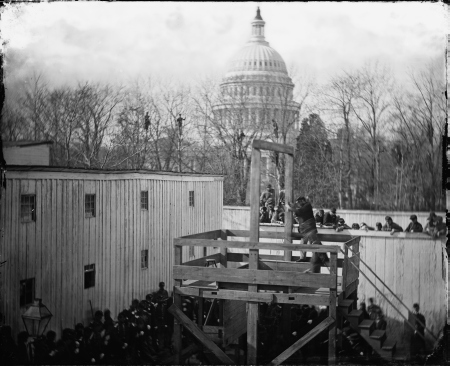 The hanging of Henry Wirz

This month in Virginia the American Baptist Home Mission society establishes the Richmond Institute, a school devoted to the training of African American preachers and teachers. Twenty-four initially enroll, and the classes are held at night. The following year the name of the school is changed to the National Theological Institute of Richmond, and in time the black Baptist institution becomes Virginia Theological Institute, a thriving school of higher education in the present day.

“Brother Heaton reported that he had succeeded in getting back the House. A Letter of Dismission granted to Sister Elizabeth Smith. The resolution recommended by our Association at its last session in regard to our uniting with our Primitive brethren was unanimously adopted. Brother Heaton appointed a committee to purchase lumber for repairing our old House of Worship. William Coalson, Moderator John A. Rentz, Church Clerk”

While Baptists black and white thus prepare for a new future, in Washington D.C. this day an execution brings a formal closure for some Union soldiers and their families. Henry Wirz, commander of the Confederacy’s infamous Andersonville Prison in southwest Georgia where thousands of Union soldiers died due to horrendous conditions, is hanged. Some 160 witnesses were called to testify in the two-month long trial preceding his execution. While Wirz during the trial came across as largely unrepentant, some of the charges against him were fabricated and he effectively served as a scapegoat for the many atrocities at Andersonville.

Moments before his death, Wirz alledgely says to the officer in charge on the scaffold, “I know what orders are, Major. I am being hanged for obeying them.”