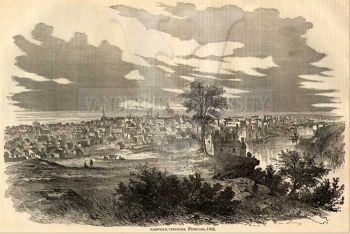 Established in 1841, the First Colored Baptist Church of Nashville consisted of slave members of the white-led First Baptist Church. From that point until the Civil War, the church functioned under the legally-required supervision of white Baptist leaders. Nelson G. Merry, a former mulatto slave, served as the church’s first pastor.

With Merry as pastor and under the supervision of the white-led First Baptist Church, the First Colored Baptist Church survived the Civil War in a city under Union occupation for much of the time.

Church splits are common in Baptist life, especially in the post-war months as African American Baptists leave white-led congregations to form their own churches. Baptist polity models departing church members of a given church to obtain letters of dismission (essentially, statements testifying to a person’s good standing with their former church) in order to start a new congregation. In many instances, African American members honor this polity by seeking to obtain permission from their former churches (churches that they, as slaves, were typically required to attend by their owners).

This month the African American members of First Baptist Nashville obtain permission to part ways and start their own congregation.

Within ten years membership numbers more than 3,000 and the church purchases land, building one of the largest black church facilities in America. In later years the First Colored Baptist Church changes its name to Spruce Street Baptist Church.