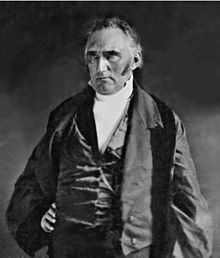 “Rev. Dr. FRANCIS WAYLAND, who was more than 28 years President of Brown University, was prostrated by a paralytic stroke on Tuesday last, and died on Saturday afternoon, at 5 1/2 o’clock, aged 69 years. The funeral will take place on Wednesday, morning at 11 o’clock, at the First Presbyterian meeting-house, in Providence.

Rev. Dr. WAYLAND was the son of an English clergyman of high standing. He was born in New-York in 1796, his parents having emigrated to this country. After graduating at Union College in 1813, he studied, medicine and was licensed as a physician. Having joined the Baptist Church, he pursued a course of theological studies at Andover and afterwards, while a tutor at Union College,was for five years minister of the First Baptist Church in Boston; and after having been for a few months a professor at Union College, was, in December, 1826, chosen President of Brown University, succeeding Dr. MESSER. Dr. WAYLAND held his responsible post for a quarter of a century resigning in 1855. Since that time he has been occupied in literary and benevolent labors of various kinds, and has also performed some ministerial duty.

Dr. WAYLAND’s career as educator and college administrator was eminently successful, the sense, solidity and strength of his mental character being peculiarly suitable to such a post. He was also widely known and influential as an author, a theologian, an ecclesiastical adviser and a wise and efficient promoter of mental and religious improvement. He was one of the earliest and most powerful agents in establishing the foreign mission system which has carried such great benefits to the healhen, and was a firm temperance and anti-slavery man.

Among his works may be mentioned “Elements of Moral Science “and “Elements of Political Economy,” both extensively used as class-books; “Life of Adoniram Judson.” 2 vols.; and “Intellectual Philosophy.”

Ho published in 1842 “Thoughts on the Collegiate System of the United States,” in which he advocated the plan of an optional college course in commercial or mechanic studies. Such a plan was at his instance afterwards introduced at Brown University, but it has not, we believe, met with a success as decided as Dr. WAYLAND expected.

Dr. WAYLAND was a man of large frame and imposing presence, such as well corresponded with his breadth and strength of mind. His life was one of very great and very practical usefulness. A son, Rev. FRANCIS WAYLAND, Jr., succeeds to a considerable share of his father’s solid and useful talents as a minister.”