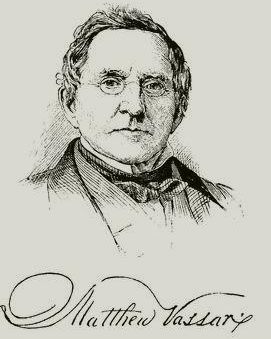 Addressing the Congress of the Confederate States of America, President Jefferson Davis discusses the need to make a south-wide assessment of the arms and munitions available to the Confederacy for the protection of Southern families from possible hostile action on the part of the United States of America.

Meanwhile, New York Baptist layman and businessman Matthew Vassar (illustration) addresses the founding board of trustees of Vassar Female College, transferring to the board the financial resources and land for the creation of the institution. The college will be the first female institution of higher education in the nation. Vassar’s progressive views are voiced in his address:

… woman, having received from her Creator the same intellectual constitution as man, has the same right as man to intellectual culture and development.

I considered that the MOTHERS of a country mould the character of its citizens, determine its institutions, and shape its destiny.

Next to the influence of the mother is that of the FEMALE TEACHER, who is employed to train young children at a period when impressions are most vivid and lasting.

It also seemed to me that, if woman were properly educated, some new avenues to useful and honorable employment, in entire harmony with the gentleness and modesty of her sex, might be opened to her.

I wish that the course of study should embrace, at least, the following particulars: The English Language and its Literature; other Modern Languages; the Ancient Classics, so far as may be demanded by the spirit of the times; the Mathematics, to such an extent as may be deemed advisable; all the branches of Natural Science, with full apparatus, cabinets, collections, and conservatories for visible illustration; Anatomy, Physiology, and Hygiene, with practical reference to the laws of the health of the sex; Intellectual Philosophy; the elements of Political Economy; some knowledge of the Federal and State Constitutions and Laws; Moral Science, particularly as bearing on the filial, conjugal, and parental relations; Aesthetics, as treating of the beautiful in Nature and Art, and to be illustrated by an extensive Gallery of Art; Domestic Economy, practically taught, so far as is possible, in order to prepare the graduates readily to become skillful housekeepers; last, and most important of all, the daily, systematic Reading and Study of the Holy Scriptures, as the only and all-sufficient Rule of Christian faith and practice.

All sectarian influences should be carefully excluded; but the training of our students should never be intrusted to the skeptical, the irreligious, or the immoral.

In forming the first Board of Trustees, I have selected representatives from the principal Christian denominations among us; and in filling the vacancies which may occur in this body, as also in appointing the Professors, Teachers, and other Officers of the College, I trust a like catholic spirit will always govern the Trustees. It is not my purpose to make VASSAR FEMALE COLLEGE a charity school, whose advantages shall be free to all without charge; for benefits so cheaply obtained are cheaply held; but it is believed the funds of the Institution will enable it to offer to all the highest educational facilities at a moderate expense, as compared with the cost of instruction in existing seminaries. I earnestly hope the funds will also prove sufficient to warrant the gratuitous admission of a considerable number of indigent students, annually at least, by regarding the amount remitted, in most cases, as a loan, to be subsequently repaid from the avails of teaching, or otherwise. Preference should be given to beneficiaries of decided promise-such as are likely to distinguish themselves in some particular department or pursuit-and especially to those who propose to engage in the teaching of the young as a profession.

I desire that the College may be provided with commodious buildings, containing ample apartments for public instruction, and at the same time affording to the inmates the safety, quiet, privacy, and purity of the family.