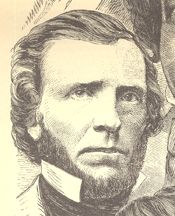 The President of the United States: Being animated by an earnest desire to unite and bind together our respective countries by friendly ties, I have appointed M. J. Crawford, one of our most settled and trustworthy citizens, as special commissioner of the Confederate States of America to the Government of the United States; and I have now the honor to introduce him to you, and to ask for him a reception and treatment corresponding to his station and to the purpose for which he is sent. Those purposes he will more particularly explain to you. Hoping that through his agency. &c. [sic.]

Given under my hand at the city of Montgomery this 27th day of February, A.D. 1861, and of the Independence of the Confederate States the eighty-fifth.

Will Lincoln make war upon us? It is uncertain, and cannot be told until he is inaugurated. If he is wise he will recognize the Southern Confederacy, promptly and without higgling. But if he should be so demented as to make war upon us, the North will be bankrupted whilst blood will be only the cement of our noble and grand Confederacy.

… we are happy to announce that our Congress is a united, harmonious, unselfish band of patriots, laboring for one end: The good of all; and we hope that all their acts and ordinances will be cordially sustained by a patriotic and unanimous people.