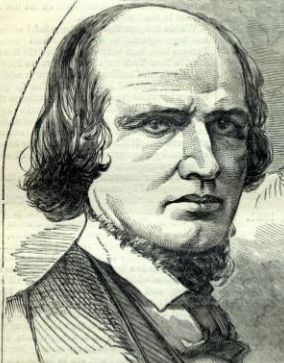 Mississippi becomes the second state to secede from the United States. Among Mississippi’s leading advocates of secession and promoters of the Confederacy is Reuben Davis (1813-1890), a politician/physician/historian/lawyer from a Baptist family.

“A true Southerner” and ardent advocate of black slavery, Davis is a renowned lawyer and Mississippi congressman who resigns his congressional seat upon Mississippi’s secession. Concerning secession, he declares, “peaceable secession was an idle dream.”

Upon the publication of Davis’ Recollections of Mississippi and Mississippians (1889), the New York Times said of the volume, “… it often strikes the readers as he goes through these pages that the extremists were almost alone responsible for the formal acts of secession, and that the Southern people in large were not in favor of them.” Of Davis, the Times commented that he was “Emotional in all things … deliberate and cautious in few.” He was, in short, a fire-eater: an extremist pro-slavery politician from the South who strongly pushed the separation of the southern states from the United States and into a new union.