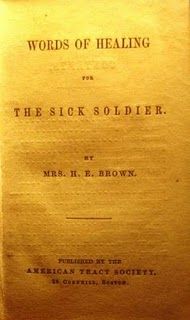 Southern Baptists are ramping up production of tracts for Confederate soldiers through the Baptist Colportage Board in Richmond, Virginia. From today’s Richmond Daily Dispatch:

A friend informs us that the Rev. M. D. Hoge, D. D., of this city, is now preparing a tract for general distribution among the Confederate forces, embodying just such advice as every soldier needs. The tract will be published by the Baptist Colportage Board, and be sent in large numbers to the various encampments in the State. Persons who would like to have copies of this tract to send to their friends, should at once lot it be known how many they will take. –Not less than 50,000 copies ought to be used. We are glad to learn that the committee of Publication, appointed by the Baptist Colportage Board, are arranging to issue one tract a week for some weeks to come. All of these tracts will be specially intended for soldiers, and will be prepared by the most distinguished divines in the Commonwealth. It is an easy, pleasant, and most effective means of doing good to a class of the community in whose spiritual as well as temporal welfare all ought to be deeply interested.

Having largely relied on the American Baptist Publication Society for Gospel tracts in the past, but now detached from the northern-based publication board, Southern Baptists’ dependence upon a Presbyterian minister (Hoge) as an author reflects the lack of publication resources in the early months of the war.

Note: The soldier tract pictured above is a Union tract, but is representative of soldier tracts North and South.