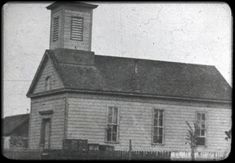 “They served in the Richmond area and were actively engaged from the Maryland Campaign to Cold Harbor, actively participated in the siege operations against Richmond and the Appomattox Campaign. At Gettysburg, the engaged unit consisted of 62 men, however, many were captured at Sayler’s Creek on April 6, 1865. They were amongst others during the surrender of the army. Captains Edgar F. Moseley, Benjamin H. Smith, Jr., and Robert C. Stanard were in command.”

While the seminary serves as a training ground for Confederate soldiers, far to the West in California another group of Baptists, distant from drills and battlefields, dedicate a new church building this month. California is prospering as Americans from the East seek their fortunes on the West coast. The new sanctuary of the First Baptist Church of Stockton reflects the growth taking place in the city. Measuring 45′ x 87′ with a tower and a 130′ steeple, the auditorium and balcony seat 500 people.

While few thus far, Baptists in the Western United States remain apart from the Civil War that ravages the South.