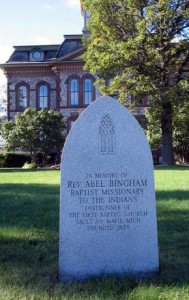 In the heart of winter, the 8th Michigan Infantry prepares for battles that are certain to commence upon the coming of spring. Today the regiment receives a consecration from Abel Bingham, pastor of the First Baptist Church of Grand Rapids and veteran of the War of 1812. Among those whom Bingham prays over is his son-in-law, Claude Buchanan. Bingham thus prays:

May the Lord of Hosts be your Leader, ever inspiring both officers and men with true patriotism, and a confidence reliance on the Divine arm in every emergency, and make you brilliantly triumphant in every combat.

Victory in “every” engagement is a bit much to ask of God, yet the 8th Michigan does serve valiantly throughout the war as the regiment traverses both the eastern and western theaters of engagement.

For his part, Bingham’s story is coming to a close. Born in Enfield, New Hampshire in 1786, following the War of 1812 he was appointed by the Baptist Mission Board in 1828 as a missionary to the Indian tribes in the Upper Peninsula of Michigan. For the next 27 years he ministered among the Ojibwas and Chippewas. He emphasized education in his ministry, establishing and maintaining a bi-racial school for Indians and white children. As did other white missionaries to Native Americans, Bingham introduced and implemented, as much as he could, white customs and morality among the natives. Establishing a Baptist church among the Indians upon his arrival, by the end of his missionary years the congregation (later named First Baptist Church Sault Ste. Marie) claimed some one hundred members.

Following his retirement as an Indian missionary, Bingham moved to Grand Rapids to be near his daughter. He assisted in the establishment of several Baptist congregations in the city, and for two years pastored the First Baptist Church of Grand Rapids. He lives through the war years, dying at the age of 80 in 1865.