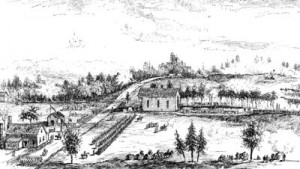 Today is the sixth day of what becomes known as the Seven Days Battles.The day’s conflict is the Battle of Glendale, but is also known (in the tradition of naming battles by landmarks) as the Battle of Frayser’s Farm, Frazier’s Farm, Nelson’s Farm, Charles City Crossroads, New Market Road, or Riddell’s Shop.

When the day’s fighting ends, Union Maj. Gen. George B. McClellan’s army, slowly retreating from the vicinity of Richmond while trying to fend off attacks by Confederate Gen. Robert E. Lee’s Army of Northern Virginia, secures a strong position on Malvern Hill. Each side suffers nearly 4000 casualties in a battle that is technically inconclusive.

The day’s fighting partially takes place in and around a small community named Gravel Hill (formerly Gravelly Hill), some twelve miles southeast of Richmond. The story of this unusual Virginia community provides poignant historical background to the war over African slavery.

Upon the 1772 death of Quaker landowner John Pleasant, his will emancipated his slaves older than 30 years of age. Yet a law prohibiting the manumission of slaves by private citizens prevented the freeing of Pleasant’s slaves for several years, until successful appeals were made to the Virginia Court of Appeals.

Legal hurdles cleared, some two dozen free African families settled on the 350 acres of land willed to them, forming the Gravelly community, later known as Gravel Hill. The freemen grew their own food and operated small businesses, living quietly and keeping largely to themselves as the Southern economy increasingly became slave-driven. Many attended a black Quaker Church, established in 1801. Later, some become Baptists, as did many Africans, both freedman and slaves, in the antebellum and Civil War-era South.

Today, however, the Civil War comes to Gravel Hill. In the preceding months, some of the community’s freedmen had been abducted and forced to work for the Confederacy. Now, the community finds itself caught between the opposing forces. Amidst rifle and canon fire, residents flee. When they return after the fighting has moved on, houses are bullet-riddled, one has been stripped of furniture, and another is serving as a makeshift hospital.

However, the community survives today’s fighting, as well as a second encounter with the war (the First Battle of Deep Bottom in July, 1864 during the Siege of Petersburg). A model of emancipation some 90 years prior to the end of the Civil War, Gravel Hill remains intact following Southern emancipation and exists to this day. Descendants of the original freedmen no longer work the land for a living, while many of the young generation have moved to nearby housing developments (and some out of state). Nonetheless, the families remain close knit, and “almost everyone attends Gravel Hill Baptist Church on Sundays, followed by a huge brunch or barbecue at someone’s house.”