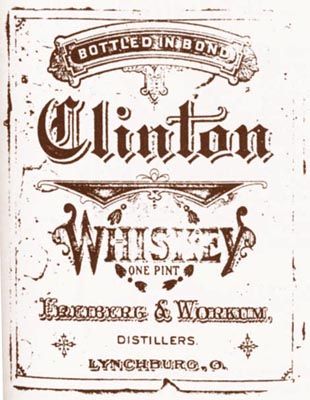 An appeal to the soldiers of the Confederate States, by an old instructor, many of whose former pupils are in the army:

GENTLEMEN:–I almost said heroes. I will call you martial heroes. I cannot call you all moral heroes, for moral heroism implies fortitude and self-denial, and we at home, your fathers, mothers, brothers, sisters and friends, hear with sorrow and dismay that you, our pride, our hope, who at the call of danger to your country, sprang so gallantly to the rescue, freely bared your breasts to the shafts of battle, and in most unequal circumstances repeatedly drove back the countless hordes of our enemies are, many of you, yielding to Intemperance, a foe insidious and contagious, by which it is more disgraceful to be conquered by it than by themselves, since their aim would be answered without exposing themselves to your terrible steel. Oh, dear countrymen! whither are you drifting? For the cause these things out not to be. You profess to feel that your cause is noble, just and holy. A noble cause ought to make noble champions, inspire them with its own nobleness, and raise them to the height of the great argument. What protector of a noble woman would not feel himself elevated by her confiding pressure upon his arm and her aid-asking eye? You have such a goddess, Liberty, leaning upon you her imploring eye to save her from pollution. She should make you lords of the lion heart and eagle eye.– But we hear that some of you are unsteadying your step, relaxing your discipline, lowering your regal post, and losing your conscious look of independence, and that too in the presence of the enemy, by putting another enemy in your mouth to steal away your brains. My friends, believe not the selfish logic of drunkards, who want companionship to countenance their excesses, nor the still more selfish persuasions of distillers, who buy up the children’s bread to convert it into adulterated whiskey to madden the brains of their fathers and bring them down in shame and sorrow to premature death or decreptitude! If anything is proven, it is proven by the endurance and almost super-human victories of the water drinking heroes of antiquity, and the almost uniform testimony of the great physicians, that the use of Ardent Spirits is weakening. Hear what the great and good Dr. Rush the Father of American Medicine, says: 1. ‘These liquors were formerly used only as medicine.’ 2. ‘Since the introduction of spirituous liquors physicians have remarked that a number of new diseases have appeared among us.’ 3. ‘I have only named a few of the principal disorders produced by spirituous liquors. It would take up a volume to describe how much other disorders natural to the human body are increased and complicated by them.’ 4. ‘Spirituous liquors destroy more lives than the sword. War has its intervals of destruction, but spirits operate at all times and seasons upon human life.’ 5. ‘There cannot be a greater error than to suppose that spirituous liquors lessen the effects of cold upon the body.’ 6. ‘It is equally absurd to suppose that spirituous liquors lessen the effects of heat upon the body.’ 7. ‘I maintain, with equal confidence, that spirituous liquors do not lessen the effects of hard labor upon the body.’ 8 Hear these awful words of doom, ‘A people corrupted by strong drink cannot long be a free people.’ 9. ‘I must beg leave to inform them (that is intemperates) that they must leave off suddenly and entirely. No man was ever gradually reformed from drinking spirits.’ 10. ‘He (that is the reforming temperate) must not only avoid tasting, but even smelling them until long habits of abstinence have subdued his affection for them.’ 11. ‘To prevent his feeling any inconvenience from the sudden loss of their stimulus upon his stomach, he should drink plentifully of camomile or of any other bitter tea.’ These eleven brief sentences, taken from the Dr.’s work published in 1785, very inadequately set forth his appreciation of the evils of Intemperance.

You would not think that I over-estimate the degree of public alarm on your account, if you could see as I see how the public is stirred on receipt of intelligence that intemperance is fast conquering those who conquered at Bethel, Manassas, Springfield, Carthage, Greenbriar, Belmont, Leesburg and other striken fields–how christians of all denominations are forming themselves in to union prayer meetings to pray for you, not so much to save you from your mortal as your alcoholic foes–how your tender ones, your mothers, wives, children, loved ones, who have adopted you as their chosen champions; who have worked for you into the night, until their heads reeled, their eyes swam and their fingers ached and even bled–how their hearts throbbed, their bosoms exulted, and their eyes dilated with joy when they heard of your successes; how their cheeks paled, their heads drooped, their tongues stopped, when they heard of your excesses! If you could see them, did I say? You may, with a very small effort of imagination, see them, and hear them too. You may see and hear your wives and children and sisters and sweethearts, with streaming eyes, uplifted hands and supplicating looks imploring you to dash the poisoned cup from your lips, which they have so often fondly pressed. And will you render them less sweet and less worthy to be pressed again by polluting them with impure liquor? You may picture the majestic form and awful voice of Washington saying to you, if I with but a handful of undisciplined troops, far inferior in appointments to you, passed victoriously through a seven years war; and often marked our retreat through the snows of winter by the blood that dripped from our naked feet, with but a very moderate use of ardent spirits, cannot you do the same? You may see the Guardian Angel, the Protecting Genius of the Confederacy standing over you with alarmed visage, rent robes, bleeding body, but still hopeful and triumphant look, imploring you by all the memories of the past, by the momentous stake of the Present, and its consequences to the Future, not to sully or sink her cause by surrendering yourselves to so ignoble a foe as Whiskey.

Then Men, Freemen, Fellow, Brother, Countrymen, Soldier of Freedom, dash the lying beverage of Satan from your lips. See a Yankee ally in every bottle, and out with your sword and off with its head; and may God strengthen you to do this.

Southern Baptists at this time yet use alcohol in communion services; only in rare instances do they preach abstinence from alcohol. The war, however, is changing Baptist attitudes concerning alcohol. By war’s end, Baptists of the South, having crusaded ardently against alcohol in army camps, have set out upon a long journey toward abstinence.