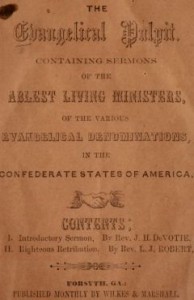 Publication and distribution of Confederate religious periodicals is a priority of Baptist leaders of the South. The cessation of commerce between North and South has forced the Confederacy to become self-dependent, while Southern Baptists in particular are abhorrent of the abolitionist sentiment that is so often expressed in Northern religious literature, and thus avoid Northern religious materials.

One such effort to provide quality, Southern religious literature to Confederate readers is The Evangelical Pulpit, monthly collections of sermons published by Wilkes & Marshal, a Baptist publishing house operating in Forsyth, Georgia. As stated within each edition, the publication contains:

….Discourses from the ablest living Ministers of Evangelical Christian denominations. The majority of the Sermons in this collection will, probably, be from Baptists, but we will allow ourselves sufficient latitude to insert the BEST SPECIMENS OF PULPIT ELOQUENCE from any Evangelical preacher.

Wilkes & Marshall advertises their publication in the Christian Index in the following manner:

The South is now cut off from Northern publications, and must, to some extent, feel the want of religious periodicals. This new and valuable work is intended to furnish wholesome reading, and preserve the sermons and memories of our worthy Preachers. It will contain the sermons of living ministers, taken down in Phonography as delivered, and sermons written by their authors.

Thus far, the Evangelical Pulpit has included sermons from several prominent Georgia Baptist ministers, including Nathaniel M. Crawford, Jesse H. Campbell, James H. DeVotie, and Amos C. Dayton. As the periodical’s title implies, the sermons are evangelical in nature, focused on salvation, doctrine, pure living, and, in some instances, reinforcing God’s will for enslavement of the African race and affirming God’s favor upon the Confederate nation.