Robert Smalls, former slave, African American Baptist layman, and United States hero for his daring capture of a Confederate steamer last year, now serves in the U.S. Navy. He is currently assigned to Port Royal, South Carolina, where he is a pilot with the South Atlantic Blockading Squadron.

Today Smalls pilots the USS Keokuk, under the command of Commander Alexander C. Rhind, in a naval attack upon Charleston Harbor, the very place where Smalls had earlier captured the CSS Planter. When the daring attack of ironclads, led by Rear Admiral S. F. DuPont, stalls, Smalls steers the Keokuk past the other vessels and takes the lead, closing to within 600 yards of Fort Sumter. 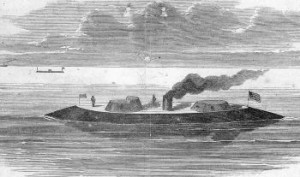 Under withering fire from the fort, the Keokuk is struck more than ninety times, many below the waterline. After thirty minutes under fire, Rhind orders a withdrawal. His eyes damaged in the assault, Smalls pilots the craft out of the range of the forts’ guns in order to allow the crew to begin repairing the damage. The repair efforts are ultimately unsuccessful, and the ironclad sinks the next morning. Smalls and Rhind are later commended for their daring assault upon the fort and efforts to save the damaged vessel.

Following the failed attack on Fort Sumter, Robert Smalls returns to his earlier assignment as pilot of the Planter, the steamer he had previously captured from the Confederacy. Eventually, he is made captain of the Union vessel.