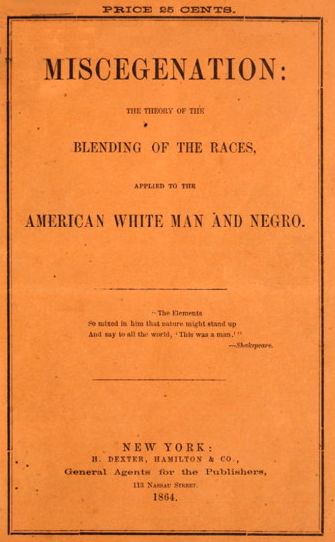 The Civil War has raised racial tensions to new heights in the South and in some areas of the North. The number of openly racist Northerners is such that U.S. President Abraham Lincoln is not assured of re-election in the coming 1864 election.

Hoping to tip the presidential election away from Lincoln and force the United States to make peace with the Confederacy, two Democratic newspapermen contrive a plot for driving a wedge in the Republican Party. As Christmas approaches, their plan is put into place on the news stands of New York City.

The title of the 72-page pamphlet screams at passers by: Miscegenation: The Theory of the Blending of the Races, Applied to the American White Man and Negro.

As described in the pamphlet’s opening paragraphs, the word ‘miscegenation’ is the creation of the work’s unnamed author, derived from combining two Latin words–miscere (to mix) and genus (race). The author, presumably a Republican abolitionist, hopes his newly-coined word will replace the prevailing term for interracial unions–‘amalgamation.’

The author then proceeds to strongly advocate for mixed marriages, arguing that mixed marriages producing mulatto children would enhance the white race. “All that is needed to make us the finest race on earth is to engraft upon our stock the negro element,” the pamphlet proclaims.

Miscegenation should be the goal of the Northern war effort and placed within the Republican platform, the author declares:

It is idle to maintain that this present war is not a war for the negro … It is a war, if you please, of amalgamation … a war looking, as its final fruit, to the blending of the white and black… Let the war go on… until church, and state, and society recognize not only the propriety but the necessity of the fusion of the white and black—in short, until the great truth shall be declared in our public documents and announced in the messages of our Presidents, that it is desirable the white man should marry the black woman and the white woman the black man.

The pamphlet stirs no little controversy, furthered by the author’s correspondence with abolitionist leaders and ads in abolitionist papers. Correspondence sent to Lincoln goes unanswered, but some anti-slavery advocates voice cautious, qualified and muted support of the pamphlet in private letters to the anonymous author.

In February, the controversy reaches a new level when a Democratic congressman and Baptist, Samuel Sullivan Cox of Ohio, denounces the pamphlet in an address to Congress, condemning Republicans as advocates of miscegenation. Pouring fuel on the fire, Cox reads quotes from private letters written by abolitionist leaders to the pamphlet’s unknown author.

A graduate of Baptists’ Brown University and the son of an anti-slavery Baptist father, Cox seems an unlikely perpetrator of inflammatory racist rhetoric. Nonetheless, his racist diatribe is widely distributed, leading prominent Republican and New York Tribune editor Horace Greeley to respond the following month by declaring that while he did not recommend interracial marriages, the issue was best left up to the persons getting married. Democratic newspapers then pounce on Greeley’s editorial, declaring that the Republican Party is advocating miscegenation, a smear that becomes one of the Democrats’ primary attacks upon Lincoln and the Republican Party during the campaign season.

Although the hoax of the December 1863 miscegenation pamphlet is finally exposed in London’s Morning Herald mere days before the 1864 U.S. presidential election, the news does not reach America until after Lincoln’s successful re-election.

The Herald story reveals that the pamphlet had been authored by two as yet unknown Democratic newspapermen who had hoped to see Lincoln defeated in 1864. Not until years later would their names be revealed. In 1870 George Wakeman, a reporter for the Democratic New York World, dies and his obituary reveals him as a co-author of the “celebrated Miscegenation hoax.” Not until the turn of the century is it revealed that David Goodman Croly (1829-1889), another New York World reporter–and prominent newspaperman, editor and futurist–had been the main author of the work. Croly is outed by his wife, Jane Cunningham Croly (1831-1901), a prominent feminist.

By this time, the word “miscegenation” is embedded in American vocabulary, racism has led to Jim Crow laws in the South, and in the North racial inequality remains a stark reality.

Meanwhile, Croly, writing in 1888 in his book Glimpses of the Future, looks ahead to the year 2000.Croly predicts that marriage will become a civil, rather than religious, institution; that Russia will emerge as a world power; the advent of photocopying and desktop publishing; the New  York subway; the projection of visual images; electricity as the dominant energy source; and the conservation movement. Following are a few other of his predictions, some of which prove prescient: