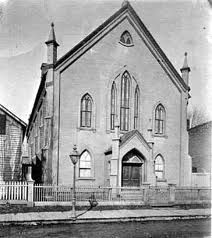 As the year draws to to a close, many thousands of black soldiers have enlisted in the United States army, primarily during the second half of the year. As the march to freedom for enslaved blacks accelerates, the Northern city of Detroit plays a significant role.

Foremost among black Baptist congregations of Detroit is the Second Baptist Church, the oldest black Baptist congregation in Michigan, and, according to some sources, the second oldest in the Midwest. Established in 1836, the church became one of the most active anti-slave congregations in America. The congregation’s abolitionists activities included involvement in the Underground Railroad and assistance in the founding of two abolitionist organizations: the Amherstburg Baptist Association and the Canadian Anti-Slavery Baptist Association. The church’s first pastor, William C. Monroe, established the state’s first school for black children, which was housed in the church basement from 1839-1842. In both 1843 and 1846, church members sponsored state-wide conventions calling for the right of black citizens to vote. In 1859, Frederick Douglass spoke to Detroit’s black citizens in the Second Baptist Church.

As the congregation this week prepares to celebrate the first anniversary of the Emancipation Proclamation, there is great pride in the church’s role this year in helping raise the 1st Michigan Colored Infantry, otherwise known as the 102nd U.S. Colored Infantry. The regiment is yet drilling, preparing for action in 1864. By the end of the war, 1673 black men serve in the 1st Michigan.

Also in Detroit this year, Fannie M. Richards becomes the city’s first black teacher. Born in Virginia about 1840 as a free black, Richards was educated in Detroit, Canada and Germany, before returning to Detroit. Now, she is teaching in a private elementary school for black children that she founded this year. In 1865 she is hired as a public school teacher in the city’s colored schools, and in 1869 she helps sponsor a successful lawsuit against the city’s racially segregated school system. An extraordinary teacher, her instructional career in Detroit spans fifty years, ending with her retirement in 1915. Fannie Richards dies in 1922 and is later elected into the Michigan Woman’s Hall of Fame.

As for the Second Baptist Church, it yet exists to the present day as a vibrant congregation.