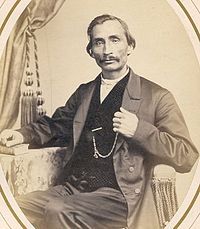 Thanks to Baptist mission efforts among Native Americans, many of the Cherokees are Baptists, including Lewis Downing, Baptist minister and military chaplain. Currently third in line for the position of tribal chief, Downing supports the allegicance of the Cherokee nation with the Union.

Downing later this year visits Washington, D.C. to inform the government that some Cherokee yet retain loyalties to the Confederacy. The split within the tribe remains throughout the remainder of the war. Upon the war’s conclusion, the Cherokee nation reunites and Downing is elected as Principle Chief of the Cherokees, holding the office from 1867 until his death in 1872.