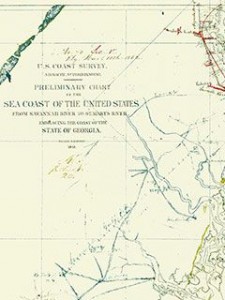 Civil War map of the Georgia coast from the Savannah River to St. Mary’s River

Readers of this week’s Georgia Baptist Christian Index learn of the latest news from Confederate army missionary Jesse H. Campbell, who is serving along the Georgia coast, an area increasingly threatened by the nearby presence of Union army troops and Union naval ships.

Dear Bro. Boykin:–As some of your readers may not take the daily papers, it may interest them to hear through the Index as to the state of things on the coast. They are apparently as quiet as they have been for months past. But there is no telling how soon “the storm of war” will burst upon us in all its fury. I am waiting here in the hope that I may in some way be useful to our soldiers, should any more of them be maimed or murdered by our cruel enemies. Though I trust in God they may be repulsed in any attack they may make on this place, yet a battle here would send mourning and sorrow throughout our State. May God deliver us from such a calamity! I know your readers will say, Amen!

During a flying trip last week South of this, I had an interview with a refugee from St. Mary’s, a merchant, who informed me that he left a valuable lot of Bibles in his store when he fled from that place. Many of them were high-priced family bibles. He has learned since from undoubted authority, that his store was broken open and these Bible torn into fragments and scattered about the streets. The churches were ruined by the enemy’s shells, and most of the town laid in ashes. Such would be the fate of this city should it fall into their hands.

On my return to this city last Saturday evening, as we were approaching the bridge over the Ogeechee river, and when only a few yards distant from it, a small boy discovered that one of the front cars was off the track. He jumped from the train and gave the alarm just in time to save us from being plunged into the river. Surely “an unseen Hand” protected us.

I had a brief but pleasant interview with my esteemed brother and fellow-laborer, Rev. Jos. S. Baker, who is devoting his attention mainly to detached companies between this and Darien. I was glad to find him in good health and much encouraged in his work. It was quite refreshing to hear his account of a certain “nest-egg five dollar bill,” given him to purchase Testaments for the poor soldiers, which had been increased many fold by the free-will offerings [of] friends. The Friendship Association has been most fortunate in securing him as their missionary, and I trust they will continue him in the field and sustain him liberally.

Last Sunday afternoon, upon very short notice, a large crowd of soldiers came together to hear me preach, who all listened with profound attention, and many with tearful eyes, to the truth as it is in Jesus. How could I be otherwise than earnest in pleading with men to be reconciled to God, who are living, not by the month or the year, but by the day. Should a battle, which is considered imminent, occur before the next Sabbath, many of them have heard their last sermon. Poor fellows! Nearly all of them came forward eagerly for prayer.

We are having better success of late in obtaining Testaments. A month or so back I received two hundred from Bro. Dickinson;–since which time I succeeded in purchasing forty in Charleston. This morning, Mr. Stoddard, a benevolent gentlemen, of this city, an Elder in the Presbyterian church, (from whom I have received much aid before) met me on the street and informed me that he has on hand one thousand Testaments, which he wishes me to aid in distributing. I trust the benediction of thousands, who are “ready to perish,” may descend upon him!

Yesterday afternoon I found a crowd collected in front of the Pulaski House, who were waiting to get a sight of General Beauregard, whose Staff and horse were waiting at the door. I took a convenient position, and did not have to wait long, as he soon passed near me, mounted his horse and galloped off towards our fortifications, followed by his Staff. He is taller and has a more commanding person than I expected to see. He is very erect, has piercing eyes, and is a splendid rider. I have no doubt he is the very best officer in our Confederacy in this Department.

I repeat an important suggestion which was made recently through the “Soldier’s Friend,” that is, that steps should be taken at an early day for the education of indigent soldiers’ orphans. I have not time to elaborate this subject now, but I trust some of your correspondents will take it in hand, and present its impo[r]tance in such a manner as to insure its success. A simultaneous and powerful movement should be made and that without delay. It is due to our soldiers–it is due to our country–it is due to posterity–it is due to humanity–it is due to Christ. God grant that it may be done!

“The storm of war” feared by Campbell is not far off, as the seaside town of Darien, south of Savannah, is attacked and burned by Federal forces on June 11, 1863.

Following the war, an eyewitness described the attack upon St. Marys–in south Georgia–that Campbell mentions in his letter:

When the Civil War came on, the citizens of St. Marys left the place and went farther up the river, most of them going to Traders Hill, about 100 miles up.  In 1863, ST. Marys was bombarded by the gunboat John Adams.  A blockade had been formed at Fernandina and this gunboat was making the ascent of the river to seize some cotton above St. Marys and was fired on by a citizen of the town, who killed the pilot of the gunboat.  This so incensed the commander that he immediately retaliated by turning his guns on St. Marys and practically destroyed the place.  A few buildings escaped; Orange Hall, the Methodist church, the Presbyterian church and a few others.  The Catholic church, the Episcopal church and the Camden County Academy were among the buildings destroyed.

When, in 1865, the citizens returned from their exodus they found ruin and devastation everywhere visible, but with unconquerable resolve they set to work to rebuild the home so dear to their hearts and in a few months they had the town partly rebuilt.