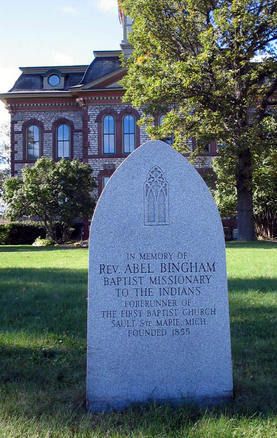 Today, Abel Bingham, pastor of the First Baptist Church of Grand Rapids, Michigan, writes to his son, Judson, who is serving as a chaplain to the 20th Massachusetts.

The elder Bingham, a long-time anti-slavery advocate, notes that he is pleased with President Abraham Lincoln‘s recent Emancipation Proclamation. He is a staunch supporter of the United States in the war against the Confederate rebels, believing that the Union “cannot be on the wrong side” of the conflict since the nation is fighting for the freedom of enslaved persons. The war has lasted this long only because the country has not sufficiently repented of various national and individual sins. The United States and her citizens need to confess and turn from sins, so that God can finish His mission of subduing the Confederacy in order to achieve freedom for all persons. This will soon happen, making the U.S. “His honored agent to give the last & finishing stroke to the gigantic institution of slavery.”

Bingham’s views thus voiced represent the thinking of many white Baptists of the North. Ministers and laity alike, in ever increasing numbers, insist that the God of scripture ordains liberty for all people. This view represents a coming-of-age of the freedom and equality expressed in the U.S. Constitution, a freedom and equality that in the late 18th century did not include black persons.