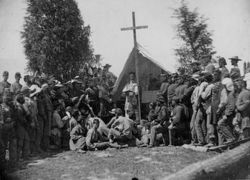 While many Southern Baptist leaders openly advocate for Confederate Baptist army chaplains, not all are convinced that chaplains are needed in the army. A recent letter writer to the Georgia Baptist Christian Index denounced the concept, and this week a rebuttal is offered from an anonymous Confederate Baptist chaplain.

I notice in the Index, of last week, an article was written by my good Bro. Johnson, against Chaplains. I have known Bro. J. long enough to know that he would not advocate a question which he did not think was right; but in the matter in hand, I think he is on the wrong side.

Brother Johnson says he is opposed to Chaplains because there is no authority for them in the Word of God. For the same reason he may take up his pen to oppose Sunday schools, Tract societies, the Christian Index, and all other religious newspapers.

Again, he says, that he is opposed to them because “we are taxed to support men who preach error, and others who fill chaplains’ places, that could not get employment at home;” and in the face of the facts as he thinks he has them, he calls on all Baptist chaplains to resign. Now, it seems to me if Baptist chaplains resign, it will only make the field larger for those who he thinks preach error.

The unnamed chaplain goes on to defend army chaplains at great length, even to the point of calling upon his friend Bro. Johnson to join the ranks of army chaplains. He concludes:

Let all the best preachers in Georgia spend two or three months in the army, this summer.