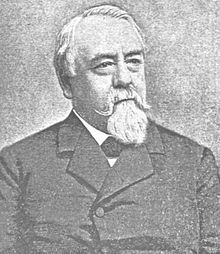 Rev. John William Jones of Virginia is rapidly gaining a reputation as an outstanding Confederate Baptist chaplain. Today is a hallmark day in the life of Jones, as is later recalled.

Along with many other chaplains, Mr. Jones was active “in season and out of season,” preaching, distributing Bibles and other good literature, working in revivals, and seeking, by letters to the public press, to secure more chaplains for the work. As a rule there was preaching every day, and, at least once. Mr. Jones preached four times in one day. On Sunday, September 6, 1863, he preached at six o’clock in the morning to his own brigade, at eleven o’clock he attended an ordination service at the Orange Court House Baptist Church, in the afternoon he witnessed, along with a crowd of five thousand men, the baptism, in a creek near the railroad, of eighty-two soldiers, and at dusk he preached, by the light of fire stands, to five thousand men seated on logs. Once, when he reached his appointment for preaching, it was raining, and he suggested that perhaps the service could not be held, but the men wanted to stay, and so the sermon was preached in the rain. On another occasion the sermon had not been preached when a shell fell in the midst of the congregation; at the suggestion of the officer in charge, the congregation moved to a more protected place and the sermon was delivered. One of the most beautiful features of the religious work in the army was the fraternal spirit of the ministers of the various denominations. No one was more fully possessed with this spirit than Mr. Jones, yet he was withal a most decided Baptist. Dr. T. D. Witherspoon, a distinguished Presbyterian minister, told, as a joke on Jones, a story that was possibly more of a joke on himself. It was customary in the army that when a soldier, upon a profession of faith, desired to unite with some other denomination than that of the minister conducting the service, he was directed to a minister of the denomination of his choice. Upon the invitation of Dr. Witherspoon, Dr. Jones had gone over to his brigade, cut the ice on a mill-pond, and baptized a number of men. In the service he had read, without comment, some of the Scripture passages bearing on baptism. The next day one of the men went to Chaplain Witherspoon and said : “I do not think you ought to invite Brother Jones to come over here any more.” When asked why he felt this way, the man replied that he did not think that Brother Jones had a right to read to the crowd ”all of them Baptist Scriptures.”