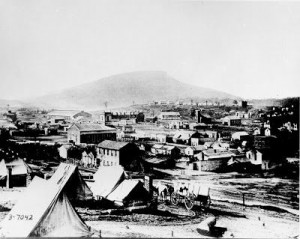 Chattanooga during the Civil War

The Tennessee city of Chattanooga, evacuated by Confederate forces, is today occupied by the Union army. Following a weeks-long Union offensive, the federals take over the city without a shot fired in opposition.

Meanwhile, a little further west in Tennessee, readers of today’s Memphis Bulletin are treated to a summary of religious life in that city, occupied by Union forces since June 1862. The account offers insight into what lies ahead for Chattanooga during Union occupation.

Our reporter made a little circuit last Sabbath among the city churches, and reports that the most of them are open, at least one a day to divine service, and that the audience for the most part are fair. A considerable preponderance of the military are found in some of them, which speaks to the praise of the profession.

On Second street, corner of Adams, the Episcopal church was served by Rev. Dr. White. Our reporter observed with that the beautiful and effective service of the church is mutilated by him, in the omission of prayers for the rulers of the land. This is the first time, he declares, that he ever heard that passage omitted from the service of the Episcopal church. The Baptist church, a little further north, is used as the Gangrene Hospital, and of course, not in a condition for religious services. Yet the solemn faces of the sufferers upon their neat white beds, and the knowledge that one of their number had just a moment before gone out into the great unknown, afforded for reflection, equal to many a service. This hospital is under the skillful charge of Dr. Weeks, and has 50 beds. The Methodist church, corner of Poplar and Second, was about half full of hearers, earnest upon the discourse of Rev. Mr. Knott, who seemed to be himself deeply in earnest in the delivery of his pious message. The First Presbyterian church, corner of Poplar and Third streets, was rather better filled. The preacher is the Rev. Mr. Steadman. St. Mary’s chapel on Poplar, beyond the market was empty, but our reporter learned that the rector, Mr. Hines, was that morning occupying the pulpit of Grace church in South Memphis and would fill his own at 3 P. M. This is a snug little church, about as big as a parlor, and looks cozy and pleasant. A colored church about a square south of this was in full blast. Just as our reporter got there, a squad of some twenty soldiers came running up with arms in hand. They had learned than an attempt was making to break up the service, and looked wrathfully upon our reporter, one of the most peaceful men ever born, for an explanation. Our reporter solemnly denied having broken up anything, or attempted to break up anything; said he got broke himself in his last speculation. He pointed to the window, nearly every one of which had been smashed, and to a colored auditor, who had evidently been cracked, if not broken by a missle and then asked in a tone of [pleased?] conviction, “do you think, corporal, that I look like a man who could do such things?” It was enough. The Cumberland Presbyterian church is closed, but he learned that this is owing to the sickness and absence of Rev. Mr. Davis, the pastor. St. Peter and St. Paul’s church on Adams street were crowed with visitors, who were pouring out as our reporter passed, resembling an active swarm of bees. This denomination of christians always keeps its churches open. Union church, corner of Beal and Main streets, had services morning and evening, besides a colored charitable society in the basement. Our reporter got there in time to attend the latter for a moment, and was gratified to learn that the benevolent enterprise has been a success. Grace church had morning service by Rev. Mr. Hines. Upon the whole, the religious facilities of Memphis, considering the season, are encouraging. We hope our religious friends will increase and multiply these means of grace, give every opportunity to saint and sinner to come nearer to God, and let the world know that however divided the people of Memphis are upon the principles of government, yet there is among them but “one Lord, one faith, one baptism.”