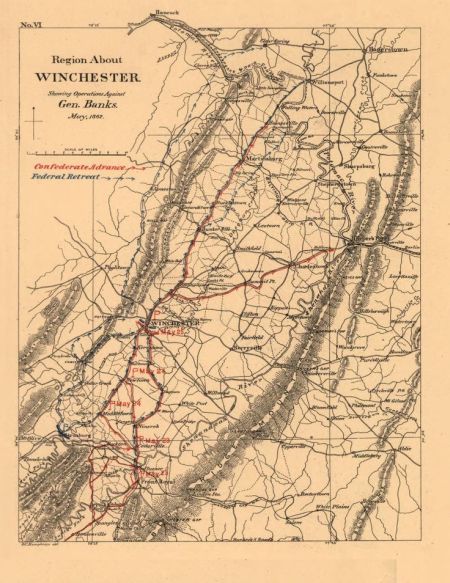 A new general is in town and a new chapter in the ongoing battle for control of Virginia’s Shenandoah Valley begins this day.

Union General Philip Sheridan is the man, and Winchester is the town. Upon hearing of the approach of Sheridan’s forces, Confederate General Jubal Early evacuates his own forces rather than engage the enemy.

Confederate General Robert E. Lee, entrenched near Petersburg against Union General Ulysses S. Grant‘s formidable armies, is mired in a desperate effort to guard the back door to the Confederate capital of Richmond. Upon learning of Early’s withdrawal from Winchester and the reinforced Federal presence in the Shenandoah Valley, he is hopeful that Sheridan will prove to be as timid as so many other Union generals have been thus far.

Lee can’t yet see that Sheridan will be a different kind of general.

In any case, for now the Petersburg trenches are Lee’s main concern.

Many soldiers and officers write of life in the trenches, and this week the North Carolina Baptist Biblical Recorder publishes an editorial that summarizes Southern hopes for a victory at Petersburg, a hope that white Southern Baptist elites are certain will be realized due to recent religious revivals among Confederate soldiers.

The history of these stirring times will be incomplete if it does not include the religious element of our armies. They have furnished for the faithful chronicler an abundance of rich material for future use, and for coming generations a shining example of patient endurance, noble self-sacrifice and chivalric daring in defense of their homes and liberties; but they have given a more enduring and useful record in the religious interest which has prevailed among them from the commencement of the war, and to which their wonderful achievements are in a large measure attributable. As a result of the prayers and efforts of christians at home and in the field, the Spirit of God has been poured out on our gallant soldiers and a series of revival influences such as the world has seldom seen, has attended them wherever they have been, in the camp, on the march, in the hospital and in Northern prisons. These things have been highly gratifying and encouraging to Southern christians and have seemed to them the surest pledge of their final success in this terrible struggle….