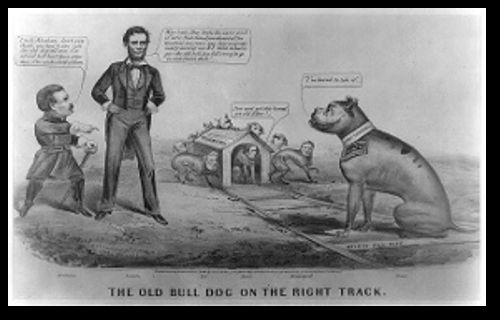 Today U.S. President Abraham Lincoln wires encouraging words to General Ulysses S. Grant, entrenched at Petersburg against a determined but outnumbered Confederate enemy. “Hold on with a bull-dog grip, and chew & choke, as much as possible,” Lincoln instructs the general, the objective being to wear down the enemy, no matter now long it takes.

Southern slaveholders also know something of holding on. Even as slaves by the thousands each month escape the shackles of bondage and flee to freedom behind Union army lines, white Southern Baptist elites, the slaveholding class, yet insist that black slaves are happy and loyal to their masters.

After all, the lot of blacks is that of servitude in order to make the lives of the wealthy aristocrats, descendants of fine European stock, as pleasant as possible. Thus is the will of God, and any story of faithful slaves, whether told in proper context or not — or true or not — is held up as proof that blacks are happy and content in bondage.

This week’s North Carolina Baptist Biblical Recorder carries just such a story, the type of story designed to make wealthy white Southerners swell with pride at their righteousness and weep with joy over the faithfulness of their slaves.

When Beaufort, S. C., fell into the hand of the Federal troops, Col. Morrow of Ohio was made Provost Marshal of the place. Col. Morrow had been reared in Baltimore, his mother having been a member of the 7th Baptist church, of which Dr. Fuller is the pastor. The Doctor has been pastor of but two churches, his first charge being the Beaufort church. Among the many negroes captured in Beaufort was an old man who had been for many years sexton of the church there. Learning that Col. Morrow knew “Mass Richard,” as he styled Doctor Fuller, he sought opportunities for conversing with him about his old pastor. As the Col. had become disgusted with the Federal service, and was about to return home, the old sexton, with an unusually serious expression of countenance, asked him on on occasion, to accompany him to his house. There taking him into his chamber and carefully unlocking the door, the old negroe drew from between the straw and feather beds on which he slept, the Bible, hymn-book and service plate of the church in which he had officiated, and which he had long kept concealed, and with tears in his eyes committed them to the Col., charging him to deliver them safely to the hands of “Mass Richard” himself. These sacred relics of a once prosperous church and beloved church, the Dr. now has in his possession. The above facts I received from the Dr. himself, whose tears could scarce be restrained as he narrated them.

A more realistic view of slavery is found in the daily notices of runaway slaves in the Richmond Daily Dispatch. Not a one of the escaped slaves, this day or ever, is running to his former master to return a Bible or a sack of gold or anything else, for that matter.

One of the many runaway notices this day announces a $150 reward for the return or imprisonment of “my man Joe.”

He is about twenty-three years old, five feet six or seven inches high, gingerbread color, looks down when spoken to. He carried away blue pants and gray frock coat. He generally wears a round jacket and home-made pants. I will give the above reward if delivered to James Kersey, in Richmond, or secured in any jail so I get him.

Somehow, many slaveholders manage to convince themselves that even when their slaves run away, in their hearts they are loyal to their masters.

Such deception has been at the very heart of Southern apartheid since the earliest days of slavery. But never before has freedom for so many slaves been so close at hand, nakedly exposing, to the impartial observer, the hollow sham of the public credulity of Southern aristocrats.