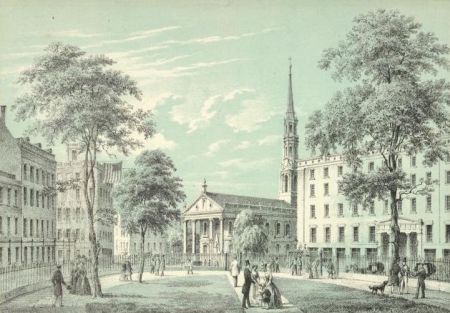 The New York Times reports extensively on the graduation exercises and the happening surrounding the event. The festivities are such that one could be forgiven for forgetting, for a few days, that a fierce and bloody war yet plagues America.

A carriage ride of twenty-eight miles, through a lovely, fertile section of the country, brought me to this delightful place. My traveling companions were Rev. Dr. CAMPBELL, of the Presbyterian Church, Utica, and Rev. L.M. WOODRUFF, of Saratoga Springs, the poet selected by the literary societies of the University, and a number of the New-York bar. Resting our horses at Oriskany Falls, we got a good supper, and then your correspondent, taking the ribbons, we dashed into the more man charming village of Hamilton by moonlight. The commencement, exercises of Madison. University opened on Sunday morning last with, the annual discourse before the New-York Baptist Education by Rev. Dr. SHELDON, of Troy, who selected his text from 1 Timothy, iv., 16, and entitled his subject the “Purpose and Aim of the Ministry.” It was written with thoughtful care and a conscientious regard for the; interests and responsibilities of the high office, and embodied many of those practical teachings which the experiences of life gather and the duties of life demand. It was very earnestly delivered, and gave the assurance that one reason of the speaker’s distinction was his goodness and love of right and truth.

In the afternoon the Baccalaureate was delivered by Rev. GEO. W. EATON, LL.D., President of the University, who has recently returned from Europe. Ecclesiastes, x., 9, furnished the text for the Doctor’s theme, which was “Activity, the Normal Condition of Man’s Nature.” He sought, with all his commanding abilities, to impress the young men that unremitting effort was necessary to the attainment of life’s great ends, and should call into noble and vigorous exercise all the faculties of the human soul. The discourse was full of the best and wisest counsel, and awakened a deeper love and reverence for the learned Doctor in the hearts of all who heard it, many of whom were his personal friends, and alumni who had not before seen him since his return to his native land, after a year’s absence in the Old World, where he did right good loyal service in behalf of our nation by speeches, and otherwise correcting false ideas of the nature of the great struggle here for the integrity of our Union. A more earnest, outspoken advocate of the Union cannot be found in Central New-York than Dr. EATON.

On Sunday evening the sermon before the “Society for Religious Inquiry,” was preached by Rev. Dr. CAMPBELL, of Utica, whose text was Psalm xcvi., 6 — “Strength and beauty are in his sanctuary,” — defining his subject to be “strength and beauty, or their correlatives, the practical and aesthetical in religion.”

On Monday, A.M., the examination of the Thelogical class took place, under the charge of Dr. DODGE, and passed off in a satisfactory manner. In the evening occurred the anniversary of the AEonian and Adelphian Societies. It had been expected that a distinguished gentleman formerly of Boston, and late of New-York, would be the orator; but a few days since word came that he could not appear. In this emergency “the boys” appealed to their friend and President, Dr. EATON. With characteristic promptness he responded with an oration upon “The conditions of success in intellectual efforts,” and which embodied instruction sufficient and excellent enough for a lifetime.

The Doctor was followed by Rev. L.M. WOODBUFF, of Saratoga Springs, the poet chosen for the occasion, who was greeted with great applause, and recited his poem on the “Man for the Times,” who should be a true hero in all the patriotic, generous, noble, and humane impulses of human nature; not selfish, miserly, partisan, or half-hearted. He then in graphic lines portrayed characters of would-be men and politicians, and with writhing satire convinced the audience that a Copperhead cynic was not the man for the times — a sentiment that awakened outbursts of applause. The poem throughout was grave and gay, lively and severe, and presented just the right ideas for these times.

On Tuesday took place the commencement of the Theological Seminary. The speakers numbered nine, with their subjects as follows: “No Arbitrariness in God,” by N.L. ANDREWS, very able; “Biblical Preaching,” by JONATHAN BARTON; “Art superior to Science in the Pulpit,” by E.B. EDMUNDS; “Faith as a Condition of the Divine Life,” by L.Q. GALPIN; “Individuality Preserved,” by Z.GRENELL, Jr.; “The Soul Naturally immortal,” by C.H. JOHNSON; “Man Responsible for his Belief,” by S.J. LUSK; “Christianity an Absolute Truth.” by F.W. TOWLE, and “Independence in the Pulpit,” by J.D. TUCKER, who took occasion to rebuke church deacons who were engaged in cultivating the wine plant, which caused quite a sensation on the platform, where certain members of the Board were seated comfortably. The oration of Mr. BARTON was one of the most earnest, forcible and successful arguments upon the Bible being the constitution of our religion, and the importance of making it the supreme law of the pulpit, and the rule of action among congregations and citizens; that its teachings were the great truths, and consequently the great lessons to be taught among the people, politicians and all, if we would secure that justice and righteousness which exalteth a nation. The address to the graduating class was delivered by Professor DODGE.

In the afternoon, addresses were made before the Education Board by Revs. Mr. OSBORN and BROWN, the latter pastor of the Tabernacle Baptist Church, Brooklyn. In the evening, the oration before the alumni and friends was delivered by N. STILES PARKER, of Stockbridge, Mass., upon “Strength and Force,” illustrating, alter an hour’s argument, his subject with a history of the immortal Army of the Potomac under their ill-starred Generals, and which occupied three-quarters of an hour more, during which time one-half the audience left, and the other half continually applauded, much to the encouragement of the speaker.

On Wednesday, Aug. 17, the college commencement took place. Notwithstanding a heavy rain was falling all the morning, a large audience of ladies and gentlemen reached the University buildings by all sorts of vehicles and on foot. The immense chapel was well filled, and the graduating class came off as follows:

6. “The Transient and the Permanent” — A.S. Merrifield.

At the close of the orations, President EATON conferred the degree of A.B. upon the graduating class, and that of A.M., in the course, upon Rufus F. Buell, Harry Warren and Miner Palmer, and the following honorary degrees: Thet of A.M., upon T.M. Merriman, of Auburndale Seminary; L.M. Woodruff, Saratoga Springs, and A.F. Wiley, Burlington, Iowa. The degree of D.D. was conferred upon Rev. S.J. Cresswell, of Philadelphia; Rev. Sampson Talbot, President Granville University, and Rev. Wm.S. Mikels, pastor of the Sixteenth-street Baptism Church, New-York City. The degree of LL.D. was conferred upon the distinguished author, orator and co-worker in the cause of humanity, Union and liberty, George William Curtiss, Esq., of New-York City, and upon Rev. John Hebb, Professor of one of the University in Edinburgh, Scotland. When the names of Messrs. Woodruff, W.S. Mikels and G.W. Curtiss, respectively, were announced as the recipients of distinguished honors, a round of spontaneous applause burst from the audience.

In the evening the annual reunion of the alumni and friends was hew in the chapel. Speeches, short, bright and genial were made by several gentlemen from New-York and elsewhere. It was a fitting close of a week’s intellectual and social enjoyment, which quite redeemed the similar occasions of the last two years. Every thing passed off, gloriously, and high promises are given for the future of Madison University. J.E.H.