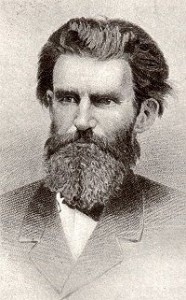 Bradbury has long been a Baptist, having joined the Charles Street Baptist Church in Boston, Massachusetts at age fifteen. As a young man, he was a member of the New York Baptist Tabernacle. Traveling to Germany in 1847 to study music, afterwards Bradbury devoted his musical efforts to writing Sunday School songs for children.

Fanny Crosby also grew up in the North, near New York City. Blinded at the age of six weeks, Crosby in the midst of her handicap became a dedicated Christian, memorizing long biblical passages and attending a Methodist Episcopal church in her young years. At eight years of age, she began writing poetry with Christian themes.

At the age of fifteen Crosby enrolled in the New York Institute for the Blind and became an advocate for federally-funded education for the blind, addressing the United States Congress on a number of occasions. Following her graduation from NYIB, she became an instructor at the school.

During the 1850s Crosby wrote poetry that was turned into musical lyrics–secular, popular tunes. She also wrote lyrics for cantatas. Her talents blossoming, she became a well-known poet while working with songwriter George F. Root. When the Civil War broke out, she began writing patriotic poetry and lyrics in support of the Union cause.

Having now composed her first hymn, Crosby in the months and years ahead trains her musical talents primarily upon sacred music. During her lifetime, Crosby writes some 9,000 hymns, becoming the most prolific American writer of sacred music.

For his part, Bradbury makes his own mark upon church music, writing the music to such popular hymns as “Just As I Am” and “He Leadeth Me.”