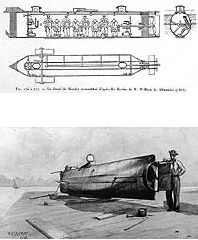 While military armies are the most visible manifestations of the war between the Confederate States and United States, sailors, vastly smaller numerically than soldiers, also play an integral role in the great conflict. The North’s strategy of containing and isolating the South depends heavily upon blockading the enemy’s port cities, while conversely the Confederacy suffers economically and strategically due to an inferior naval presence, a disadvantage that yet remains.

The Union navy began blockade operations early in the war. To counter the North’s naval superiority, the Confederate government quickly began acquiring ships from abroad and developing new naval technology at home. In 1862 both North and South covered naval vessels in iron in order to have an advantage over traditional wooden ships. The first clash of ironclads took place at Hampton Roads, Virginia, a March 9, 1862, an engagement in which the U.S.S. Monitor easily defeated the C.S.S. Virginia and attendant Confederate steamers.

Meanwhile, even as the Monitor and Virginia clashed, the search for better naval technology had led to early, secretive trials of submersible water craft that became known as “submarines.” Both North and South developed such craft in early 1862. Although the earliest prototypes proved unworkable and were scuttled, marine engineers in both nations were undeterred.

The year 1863 marked breakthroughs in submarine development, albeit under a continued veil of secrecy. In Virginia the Union retrofitted the failed 47-foot long, oar-propelled submarine U.S.S. Alligator with a screw propeller, while Confederate marine engineers in Mobile, Alabama built the southern nation’s first truly operational submersible craft, the C.S.S. Hunley, a long, sleek vessel that resembled a torpedo and was powered by a hand-cranked propeller.

Following trials, both vessels in the summer of 1863 were assigned for duty off the coast of Charleston, South Carolina, the most strategic of the Confederacy’s port cities. At this time, the Union was laying siege to Charleston Harbor, as Charleston’s defenses ramped up in response.

Unfortunately, the Union’s Alligator sank during a storm while being towed toward Charleston. The Confederacy’s Hunley, on the other hand, was transported by rail and arrived safely in Charleston in August. Despite the secrecy, rumors of secret naval weapons were afoot.

With the successful arrival of the Hunley, the Confederate’s secret weapon to break the tightening Union blockade was now in place. Bad fortune, however, quickly plagued the Confederate vessel. In late August while preparing for an attack, the submarine sank and five crew members drowned. The vessel was recovered, only to sink a second time in October, with all eight crew members losing their lives, including Horace Hunley, the marine engineer who had built the submarine and for whom it was named. Again, the vessel was recovered.

Today the third attempt to steer the C.S.S. Hunley into combat takes place as the vessel slowly glides out of Charleston Harbor, the uppermost portion of its cylindrical body barely visible. Hunley’s target is the U.S.S. Housatonic, the largest vessel of the Union’s navy fleet blockading the city. Too late, sailors aboard the Housatonic spot the strange, low-lying vessel. Unable to lower their ship’s canon’s at such a downward angle, they watch helplessly as rifle fire bounces off the submarine’s iron hull. Ramming the Union ship, the Hunley impels a 135-pound torpedo into the side of the Housatonic, then backs away in an attempt to obtain safe distance before the detonation rope plays out, pulling the torpedo’s trigger pin.

The subsequent explosion is catastrophic. The hapless Housatonic is blown apart and sinks within minutes. But what happens next is uncertain. The crew of the Hunley appears to surface their vessel and flash a beacon of victory to Confederate forces on shore. Yet after this reported sighting, the Hunley mysteriously disappears beneath the water and never resurfaces, taking the entire crew to the bottom of the ocean. Confederate victory is tempered by tragedy.

Thus a notable battle of the Civil War ends bittersweetly for all involved. While the success of the Hunley changes the future of naval warfare in the long run, it makes little impact during the Civil War itself. Not until the year 2000 is the Hunley recovered. The cause of her sinking remains a mystery.

Today’s naval battle in Charleston Harbor takes place in the shadow of the city’s First Baptist Church. Founded in 1682 and the oldest Baptist church in the South, the church is located only a few blocks from the water’s edge. Whether or not Baptists were involved in today’s naval action is uncertain, although Baptist soldiers serve in both navies during the war and as many as four Baptist ministers serve as Union naval chaplains during the war.