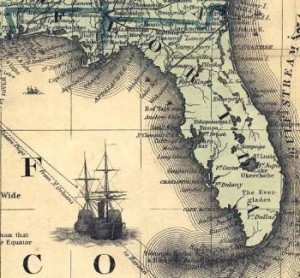 Today the Battle of Olustee or Battle of Ocean Pond is fought in Baker County, Florida. It is the largest battle fought in Florida during the war.

The battle is part of a Union offensive in Florida. Major General Quincy A. Gillmore, commander of the Union’s Department of the South headquartered at Hilton Head, South Carolina, had ordered a Florida expedition, under the command of Brigadier General Truman Seymour, to reinforce Union presence in the region, disrupt Confederate supply routes, and recruit black soldiers. Landing at Union-controlled Jacksonville, the federals conducted raids into northeast and north-central Florida. Meeting little resistance, Union forces captured a handful of Confederate soldiers and artillery pieces and liberated some slaves.

Flush with success, Brigadier General Truman Seymour set his sights on the capture of Tallahassee, ignoring Gillmore’s command not to stray too deeply into Florida. The federals, some 5,500 strong, thus march westward, following the Florida, Atlantic and Gulf Central Railroad. Today, near Olustee Station, advancing Union forces encounter a force of 5,000 entrenched Confederates under the command of Brigadier General Joseph Finegan.

For several hours an intense battle rages in the pine woods, with the Confederates finally obtaining the upper hand and forcing the federals to retreat back toward Jacksonville. The retreat to Jacksonville takes three days. As wounded soldiers arrive, they are taken to the Bethel Baptist Church (later First Baptist Church), which serves as a military hospital.

The Civil War left the church in a “deplorable condition.” According to Church Secretary Mrs. J. M. Aldridge, “the window panes [were] broken out, the plaster off the walls, and filth and dirt everywhere.”

The war-weary South praises the rout as a great victory. Casualties, however, are low: the Union suffers the most casualties, 1,861 compared to 946 Confederate casualties. The loss causes Northern military leaders to proceed with greater caution in Florida in the months ahead.

Long after the war, the United States government reimburses First Baptist the sum of $5,000 (taking into account inflation since the war) for damages to the church’s property. A 1911 congressional bill reads:

I. The First Baptist Church of Jacksonville, Fla., as a church, was loyal to the Government of the United States throughout the late Civil War.

II. During said war the military forces of the United States took possession of the church buildings and grounds described in the petition, and used and occupied the same for hospital and camping purposes, and damaged the same. The reasonable value of said use and occupation, together with damages thereto in excess of ordinary wear and tear, was then and there the sum of one thousand one hundred and seventy dollars ($1,170), no part of which appears to have been paid.

III. The claim herein was never presented to any officer or department of the Government prior to its presentation to the Fifty-ninth Congress and reference to this court by the United States Senate as hereinbefore set forth in the statement of the case, and no reason is adduced showing why the same was not earlier presented.

Upon the foregoing findings of fact the court concludes that the claim herein is an equitable one in the sense that the United States received the benefit of the use of the property for which claim is made.

In a similar fashion, many other churches confiscated by the United States government during the war are belatedly reimbursed for usage and damages.