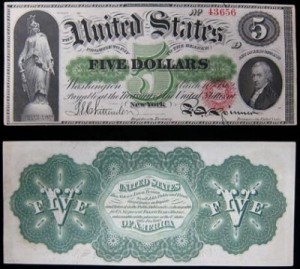 Economics is never far from the minds of the leaders of both the United States and the Confederate States.

A year ago this week U.S. President Abraham Lincoln signed the National Currency Act, creating a national banking system, a Currency Bureau and the office of Comptroller of the Currency. The act’s primary purpose was to establish a single currency, and it seems to be working. While forced to go into significant debt to fight the war, the Union is on sound enough economic footing, thanks in no small part to a steady stream of new gold and silver coming from western mines, as well as foreign trade. The flow of money allows the United States to continue financing the long-running war, develop and expand crucial infrastructure (including railroads), expand northern industry, and open up new western lands.

The Confederacy, on the other hand, is in economic shambles. External revenue is now non-existent, forcing President Jefferson Davis to implement increasingly drastic measures that inflict ever greater pain upon his own citizens.

Through a law enacted February 17, the Confederacy is now taxing property and earnings. Property, including slaves, is taxed at 5%; gold, silver and jewels at 10%; shares or interests in banks, companies or businesses at 5%; hard currency at 5%; and taxes on profits now stand at 10%-25%. As one observer noted, thanks to the new laws “it is easier for a camel to go through the eye of a needle than for a rich man to escape this tax law.”

A brief article in today’s Georgia Baptist Christian Index offers a glimpse into the economic despair hovering over the South:

Rev. J. B. Taylor, Secretary of the Foreign Board is now on a tour through our State collecting funds for our foreign missionaries. As our readers know those missionaries are living mostly upon loans that they have succeeded in negotiating with some English friends and with some of the missionaries from the United States; so that thus far they have not really suffered, though obliged to economize greatly. These obligations, incurred by the advice of the Foreign Board, must be met some day by Southern Baptists–indeed, should be as soon as a mode of transmission is opened; and it is to procure funds for that purpose that brother Taylor is journeying. We hope his mission will prove highly successful, and we advise all those Baptists who fear to hold the present currency to lend it to the Lord to be returned “after many days,” with interest. Brother T. says he is perfectly willing to receive as much of it as may be given to him for missions.

Southern Baptist foreign missionaries will remain isolated for the remainder of the war, while decades will pass afterwards before the Foreign Mission Board, dependent prior to the war upon the riches earned by slave labor, is once again on sound financial footing.