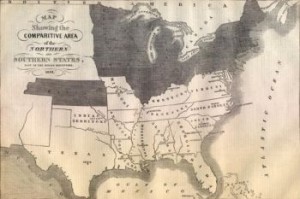 This day is filled with various maneuvers throughout the theaters of war. In Virginia and Georgia, Union troops continue their efforts to capture Petersburg and Atlanta, respectively. In the hot July weather life in the trenches is miserable at best and deadly at worst, not least of all from the lack of sanitation coupled with serious injuries. Against the weather and trench conditions, Union forces slowly but steadily are making progress against the Rebel defenders.

The plight of the Southern Confederacy has never been darker. Southern Baptist leaders pray and hope for Confederate victory while trying to rally an increasingly dispirited nation to rise and repel the abolitionist hordes from Southern soil.

White Baptist elites of the South share the same nationalist sentiments as do their white Presbyterian counterparts, to the point that Southern Baptist newspapers often reprint articles from Presbyterian newspapers, as is the case with today’s North Carolina Baptist Biblical Recorder.

A distinguished officer in our service, a few days ago, who has never made a profession of religion, and been always regarded as rather irreligious, in parting with a minister of this city to take his place in the great struggle now going forward, asked him with deep apparent emotion to pray for him. The peculiar character and history of this officer, in regard to religion, made the request a very striking one. He felt that he could go on his perilous path with more cheerful courage, if he felt that some one, in whom he confided, was praying for him whilst he was gone. Nor was he alone in this feeling. It is doubtless a feeling that is shared by many others. The most thoughtless boy in our army has a feeling of greater security in danger, as he thinks of his mother’s prayers; and the most ungodly husband lies down on the cold ground in camp with a feeling of deeper comfort as he remembers that she who loves him and thinks of him far away, has commended him to God in tearful supplication before she laid her head on her pillow to visit  him in her dreams. And even the sceptical can hardly resist the feeling, even if he doubts the efficacy of prayer, that it can do him no harm, and, on the whole, he would rather know that some one was thus uttering his name before a throne of grace. And, as far as the army in general is concerned, there can be no doubt of the fact, that they are greatly cheered by the knowledge that holy men, and pure-hearted women are wrestling with God on their behalf, whilst they are meeting the perilous front of battle. — Central Presbyterian

To say that this war is bathed in prayer is an understatement. The numbers of war-related prayers, both in the South and in the North, that are offered up daily may well be in the many millions. But not all will be answered as hoped, and in the end only one nation’s petitions will be heeded by the One upon whom so many cast their supplications.