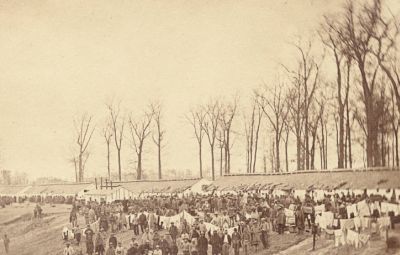 John James Price (1835-1913), native Kentuckian and Baptist layman, is a 2nd Corporal in Company L, 2nd Kentucky Cavalry, Confederates. Price’s wife, Mary “Mollie” Elizabeth Bradley (they were married in 1845), native of Wilson County, Tennessee, like other women has long worried that her husband will not survive the war. The couple’s children miss their father, as do millions of children North and South.

Price’s family’s fears mounted upon learning of his capture of June 22, at Greensburg, Kentucky. Making matters all the worse, captured along with Price were brother Thomas Price and brother-in-law William Bradley.

Today the three come face to face with their fate for the rest of the war, as they are imprisoned as prisoners of war at Camp Morton, Indianapolis, Indiana.

According to some later accounts by prisoners published in the early 1890s, the Union’s Camp Morton, constructed upon the former Indiana State Fair grounds in 1861, rivals the Confederate’s Andersonville Prison in terms of infamy.

Among the recollections of prison life at Camp Morton are the following:

Our ration of bread (one small loaf) came at 11 o’clock, and a small piece of meat at 12 o’clock. We usually ate it as soon as received, and then drank as much water as we could hold, and tried to imagine we had a full meal. Another reason for eating it at once was to save it from being stolen, as the only way to keep it until evening was to put it under one’s hat and sit on the hat; this plan being inconven- ient we made a light lunch of the whole ration and spent the balance of the day telling of the fine dinners we would have when we reached home when the cruel was over.

I remember seeing a man kill an old black cat and cook it in a tin can picked up near the hospital kitchen. I was offered a share in the feast, but declined, as I drew the line at rats and cats, though I offered ten cents for a small piece of dog, and was unable to buy it, as the possessor said he had none to spare….

The monotony of the summer months would be broken by the arrival of more poor unfortunates, and from them we would learn of battles fought and won by the South–if we had not already been apprised of the event by salutes fired and rockets sent up by our captors–all battles fought being celebrated as Union victories, whether lost or gained….

[in the ] dreadful month of January, 1865, when we suffered most from the terrible cold. We were unable to remain outside but a few moments, as our clothing and shoes were thin and in rags, so were forced to trot round in circles on the mud floors of our pens, made soft by the snow brought in on the feet of the men. These trotting circles of men would last all day, new men taking the place of those dropping out from exhaustion. It was during this terrible weather we would be forced to remain in line at roll-call for two hours at a time, because some sergeant had miscounted his men, or some poor fellow would be found dead in his bunk and was overlooked. Many men were frozen in this way and were carried to the hospital, where but few recovered, though when once in the hands of the kind doctors and nurses they were sure of good attention and warm clothing….

Men died constantly, seemingly without a cause. They would appear less cheerful and less interested in life, and next morning, when summoned to roll-call, would be found dead, either from starvation or cold, God only knows which. Many went this way and many to the hospital never to return. During this terrible month our guards were changed, and the new-comers must needs practice on the poor prisoners, some of them practically dying, to see if they could not add to sufferings already to great to be borne.

One might I saw through a crack in the stable eight or ten men being drilled in the snow with a shoe in each hand, this being for the amusement of the new guard and for punishment to the prisoners for talking after going to bed. These are some of the indignities that can be put into print, but there were things more cruel and revolting perpetrated by these guards on the defenceless men that cannot be printed.

If these numerous instances of shameful cruelty came under my personal observation, what number must have been perpetrated that none are living to record? The outrages practiced by the guards and sergeants were not all we were subjected to in December, 1864. There was an order issued by the commanding officer that the men should not remain in barracks (after the doctor has passed through) from 9 o’clock A. M. until 3 o’clock. Poorly clad, starving men were compelled to stand around in the snow until hundreds had their feet so badly frost-bitten that their toes came off. This cruel order was persisted in till many men died from exposure, when the order was countermanded. The excuse given for the order was that the men stayed in doors too much and would be benefited by exercise. Great Heavens! Had these officers raised the ragged coat or blanket from the first figure they met and looked at the emaciated, itch-scarred, vermin-eaten creature, they would have seen that the men needed more food and warm clothing to hold life in them, instead of more snow and cold north wind. I am told that the people of Indianapolis deny that these terrible things occurred in their fair city.

Indeed Northerners do deny such inflammatory accounts of prison life at Morton. A United States military commission investigates the claims and determines them to be false accusations occasioned by feelings of revengefulness. The truth, perhaps, lies somewhere between the memories of Confederate prisoners and their Union guards.

Whatever the exact conditions at Camp Morton are, John James Price, Thomas Price and William Bradley somehow survive the many months of inhumane treatment and are released on May 19, 1865 — but not before signing an oath of allegiance to the United States. Price’s oath is as follows:

Finding their way back home, the three are reunited with their joyous families. John James, Mollie and their eleven children eventually move to Farmersville, Collin County, Texas, where they farm and remain faithful Baptists until their deaths.