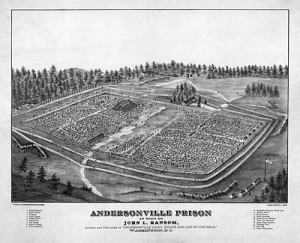 Newly-opened Andersonville Prison in southwest Georgia is the Confederacy’s answer to the problem of where to hold Union prisoners awaiting exchange. Located near the Southwestern Railroad and far from the battle front, the 16.5 acre open compound had been constructed by slaves in January. A stream flowing through the compound provides water for prisoners. The tall, tight-fitted log walls of the facility allow not even a crack for viewing outside. Only the sky is visible to the prisoners, a blessing and a curse: a blessing in that a view of the heavens is at times re-assuring, a curse in that the men below are as imprisoned to the elements of the sky as they are within the walls–cold, heat, snow and rain, with all the illnesses that each is capable of visiting upon weak and sick victims huddled below.

Officially opened on February 27, the prison has already garnered a reputation as a particularly cruel place, as an anonymous prisoner’s inscription today testifies.

March 2, 1864–A poor one-legged prisoner who placed one hand on dead line while reaching for the crutch fallen from feeble grasp, was mortally shot by guard at this place.

Henceforth through the remainder of the war, a number of Northern Baptists are imprisoned at Andersonville. Among those imprisoned are Illinois Baptist layman Uriah King of 24th Illinois and Rev. Gilbert Woolsey of Tennessee, a Free Will Baptist minister. King survives his imprisonment; Woolsey does not, dying in the compound on September 18, 1864.

Woolsey is one of some 13,000 out of a total of about 45,000 Union prisoners who do not survive the horrors of Andersonville, the prison with the highest mortality rate of any Civil War prison.

Unionist Tennesseans suffer among the highest rates of mortality at Anderson. Years after the war Tennessee survivors of Andersonville remain bitter and angry about their experiences in the hell-hole of the South, as one Baptist survivor’s story (representative of many) attests:

The end of the war did not erase the bitterness caused by the 7th Tennessee’s experiences. Thirty years after the war when one of Forrest’s men was called to be minister of the Bethel Baptist Church in Carroll County, one of the former prisoners at Andersonville protested. He was admonished to forgive as Jesus did. Alfred D. Bennet of Huntingdon replied “the Lord was just crucified, he never had to go to Andersonoville Prison”.