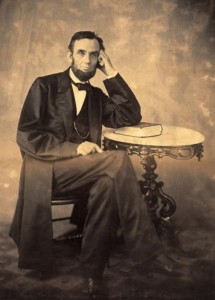 The Imitation Free Will Baptist Church was founded in Pitts County, North Carolina in 1831. By 1845 the church had twenty-four members and was holding worship services the first Sunday of each month (the monthly meetings being typical for rural Baptist churches in the South).

As is the case with many churches throughout the South, the Civil War disrupts church services. In the case of the Imitation Free Will Baptist Church, the meeting house is occasionally used by Confederate forces as a temporary shelter. Today, Union soldiers raiding in Pitts County put an end to the Confederate’s shelter by burning down the church, not the first church to face such a fate for harboring the rebels.

Not until about 1871 is the meeting house rebuilt, at which time the church’s name is changed to the Black Jack Free Will Baptist Church.

Even as the Imitation Free Will Baptist Church burns, U.S. President Abraham Lincoln continues his campaign to restore the Southern states back into the Union. Today he issues a second Amnesty Proclamation, following the unqualified success of his original December 8, 1863 pronouncement.

Whereas the objects of that proclamation were to suppress the insurrection and to restore the authority of the United States; and

Whereas the amnesty therein proposed by the President was offered with reference to these objects alone:

Now, therefore, I, Abraham Lincoln, President of the United States, do hereby proclaim and declare that the said proclamation does not apply to the cases of persons who at the time when they seek to obtain the benefits thereof by taking the oath thereby prescribed are in military, naval, or civil confinement or custody, or under bonds or on parole of the civil, military, or naval authorities or agents of the United States as prisoners of war, or persons detained for offenses of any kind, either before or after conviction, and that, on the contrary, it does apply only to those persons who, being yet at large and free from any arrest, confinement, or duress, shall voluntarily come forward and take the said oath with the purpose of restoring peace and establishing the national authority. Prisoners excluded from the amnesty offered in the said proclamation may apply to the President for clemency, like all other offenders, and their applications will receive due consideration.

I do further declare and proclaim that the oath prescribed in the aforesaid proclamation of the 8th of December, 1863, may be taken and subscribed before any commissioned officer, civil, military, or naval, in the service of the United States or any civil or military officer of a State or Territory not in insurrection who by the laws thereof may be qualified for administering oaths. All officers who receive such oaths are hereby authorized to give certificates thereon to the persons respectively by whom they are made, and such officers are hereby required to transmit the original records of such oaths at as early a day as may be convenient to the Department of State, where they will be deposited and remain in the archives of the Government. The Secretary of State will keep a register thereof, and will on application, in proper cases, issue certificates of such records in the customary form of official certificates.

In testimony whereof I have hereunto set my hand and caused the seal of the United States to be affixed.

Done at the city of Washington, the 26th day of March, A.D. 1864, and of the Independence of the United States the eighty-eighth.

While many die-hard white Southerners gnash their teeth over Lincoln’s audacity, the president’s amnesty program is working quite well. Reconstruction is already well underway in much of the South.