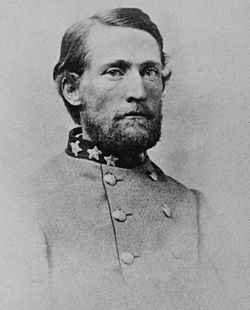 Today in Cincinnati an independent “Peace Convention” is held “for the organization of a peace party upon state-rights, Jeffersonian, Democratic principles and for the promotion of peace and independent nominations for President and Vice-president of the United States.”

Some fifty delegates huddle behind closed doors, hoping to settle upon a candidate who can defeat Lincoln and bring the war to a close by offering peace to the Confederate States.

The gathering, however, takes place with little interest from the public or the larger political world. By this point, with the Confederacy reeling in every direction from the advances of Union armies, few truly believe that peace is either possible or desirable.

Meanwhile, a Virginia Baptist preacher loses his life for his support of the United States:

On October 18, 1864 Reverend John B. Read, a lay preacher at the Falls Church Baptist Church, was executed in dense pine woods by the railroad bridge here at Piney Branch. Early that morning a contingent of Confederate Colonel John Singleton Mosby’s Partisan Rangers, led by Captain Richard Montjoy, conducted a raid on Falls Church looking for horses. Upon realizing an attack was underway, Read blew a horn to alert the Home Guard and Union pickets. As a result, Read and a black man, both members of the Home Guard, were taken prisoner.

Read was a spy for the Union and a well-known abolitionist. Mosby had warned him to confine his activities to church business or face dire consequences. Despite the threat, Read chose to follow his convictions.

Mrs. Read was grief-stricken when notified that her husband had been taken away and shot near Hunter’s Mill. She could not get a guard of either Union Army soldiers or Home Guard members to go with her to recover her husband’s body due to their fear of encountering Mosby’s forces. While she was searching for help, a note arrived from Mosby giving Mrs. Read his personal guarantee of her safety while recovering the remains of her husband.

Following retrieval of Read’s body, Major John Birdsall, 13th New York Cavalry, reported to his Brigade Headquarters that there was no doubt concerning Read’s execution-style murder based on an examination made by an Army surgeon. The surgeon also noted an attempt to kill the black man. Having shot him in the head, the Rangers, supposing him dead, left him in the woods. Later he escaped with his life but with the loss of an ear.

Col. Mosby was both hated and respected by his enemies. He is once known to have said, “Being a terror to my enemies is an honor.”

For many years after the war local legend held that children jumping rope would chant:

“Isn’t any school,
Isn’t any teacher;
Isn’t any church,
Mosby shot the preacher.”