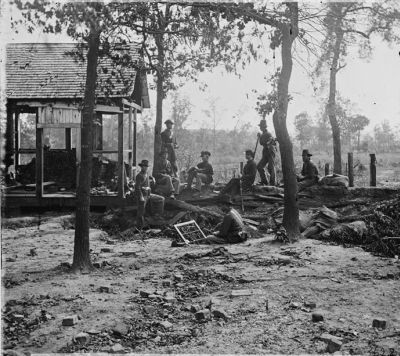 One day after the fall of Atlanta the news is ever so slowly traveling by word of mouth, as communications infrastructure in the Atlanta area is largely destroyed.

The Confederate capital is in the dark regarding Atlanta as the Richmond Daily Dispatch reports of ongoing fighting near the city: “We have news of fighting near Atlanta, but the accounts thus far received are confused and unsatisfactory….”

Col. William H. Richardson is the Adjutant General of Virginia. His Richmond office is located in the State Court House, where a buzz of conversation is now taking place about what may or may not have happened in Atlanta.

Yet Richardson has his own personal concerns, as a notice published in today’s Richmond Daily Dispatch reveals. The Adjuctant General’s notice offers a reward for the capture of one of his house servants, Edward, who is a Baptist and who has run away from his master.

Two Hundred and Fifty Dollars reward for my Servant, Edward, twenty or twenty-one years old, black, stout and likely; has a scar near or upon one ear; is a good house servant. He left my farm on Sunday night, the 28th ultimo, and is, I believe, in Richmond, where he has relatives and friends. He may possibly be found at the African Church, or other meetings of Baptist negroes.

The notice is one of many that appears in today’s Richmond paper, as is the case with each edition of the periodical.

If we thought that our paper would reach any of the misguided men who are shirking from their duty in the field, prowling through the woods, coming out into the light of day only by stealth and wasting on their peaceful and defenceless neighbors that valor which should be directed against the common enemy, we would invite their attention to the eloquent proclamation of our noble Governor and urge them to heed his appeal and return without delay to the post of duty and of honor in front of the foe. We would call on them by every consideration of patriotism, and self-respect, and regard for those who come after them, to abandon their brigand life and go at once to join their comrades in defending their homes, their liberties, their all. We would tell them they must die, if they stay where they are. How much better to die as patriots and freeman than as outlaws or–but it is needless to say more as the Recorder will hardly ever reach one of these deserters; or if it should, they will hardly read it. If, by any means, it should fall into the hands of one of them he would do well to give the Governor’s proclamation a careful perusal.

The editor’s anger aside, the poor white soldiers who, no longer willing to fight a slaveholders’ war, are deserting the Confederate Army by the thousands pose as much a problem for the Confederacy as does the loss of Atlanta. The totality of escaped slaves, now numbering in the many tens of thousands, is also a terrible blow to the South. So much for the loyalties of poor whites and enslaved blacks.

In the midst of the ongoing Southern angst over runaway slaves and soldier desertions, as well as the confusion over the status of Atlanta, U.S. president Abraham Lincoln finally receives word of the great Union victory in Georgia. Elated, he sends hearty congratulations to U.S. General William T. Sherman, then issues a call for a celebration of the capture of Atlanta, in the form of a 100 gun salute in cities across the nation at noon on September 7. In addition, Lincoln issues a call for a celebration of the recent victory in Mobile Bay, Alabama, to be held on September 5the in Washington. Yet so significant is the victory over Atlanta that the September 5th firing of cannon in Washington is destined to be more about Atlanta than Mobile Bay.

First.—That on Monday, the 5th. day of September, commencing at the hour of twelve o’clock noon, there shall be given a salute of one hundred guns at the Arsenal and Navy Yard at Washington, and on Tuesday September 6th., or on the day after the receipt of this order, at each Arsenal and Navy Yard in the United States, for the recent brilliant achievements of the fleet and land forces of the United States in the harbor of Mobile and in the reduction of Fort Powell, Fort Gaines, and Fort Morgan. The Secretary of War and Secretary of the Navy will issue the necessary directions in their respective Departments for the execution of this order.

Second.—That on Wednesday, the 7th. day of September, commencing at the hour of twelve o’clock noon, there shall be fired a salute of one hundred guns at the Arsenal at Washington, and at New York, Boston, Philadelphia, Baltimore, Pittsburg, Newport, Ky. and St. Louis, and at New Orleans, Mobile, Pensacola, Hilton Head & Newberne, the day after the receipt of this order, for the brilliant achievements of the army under command of Major General Sherman, in the State of Georgia, and the capture of Atlanta. The Secretary of War will issue directions for the execution of this order. ABRAHAM LINCOLN

The president does not stop here, however. He also announces a national day of “Thanksgiving and Prayer” to be observed on September 11.

Executive Mansion,
Washington City September 3d. 1864
The signal success that Divine Providence has recently vouchsafed to the operations of the United States fleet and army in the harbor of Mobile and the reduction of Fort-Powell, Fort-Gaines, and Fort-Morgan, and the glorious achievements of the Army under Major General Sherman in the State of Georgia, resulting in the capture of the City of Atlanta, call for devout acknowledgement to the Supreme Being in whose hands are the destinies of nations. It is therefore requested that on next Sunday, in all places of public worship in the United-States, thanksgiving be offered to Him for His mercy in preserving our national existence against the insurgent rebels who so long have been waging a cruel war against the Government of the United-States, for its overthrow; and also that prayer be made for the Divine protection to our brave soldiers and their leaders in the field, who have so ofen and so gallantly perilled their lives in battling with the enemy; and for blessing and comfort from the Father of Mercies to the sick, wounded, and prisoners, and to the orphans and widows of those who have fallenin the service of their country, and that he will continue to uphold the Government of the United-States against all the efforts of public enemies and secret foes. ABRAHAM LINCOLN

Lincoln is well justified in his celebratory feelings and his thankfulness for divine providence. The combination of victories at Mobile Bay and Atlanta have drastically improved his re-election prospects in the coming November elections. Re-election, in turn, will allow Lincoln to implement the final military push needed to bring the war to a conclusion.