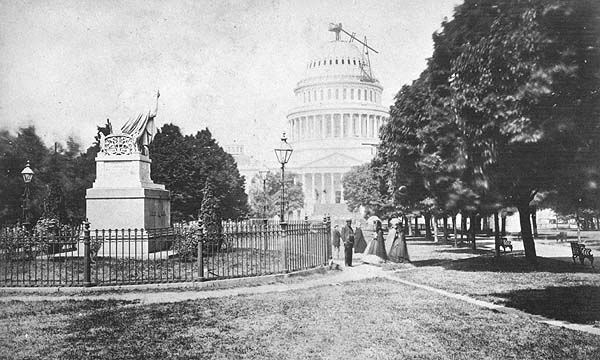 The war and subsequent liberation of hundreds of thousands of slaves has resulted in dramatic changes in the capital city of the United States.

Tens of thousands of freedmen are now living in and around Washington, D.C., many in freedmen’s villages or communities. In these villages they are receiving education and job training and are generally being prepared for a life of responsible and productive freedom after the war.

Many freedmen are Christians. In their new lives of freedom, their faith communities are autonomous, providing a strong support system for their upliftment, in addition to vibrant worship. More freedmen from the South are Baptists than any other denomination, and thus Baptist congregations are well represented among the black residents of the Washington area. Many congregations have been founded since the beginning of the war, the latest one this very day.

The new congregation, the Zion Baptist Church — named in remembrance of the travels of the founding members — is organized by sixteen persons relocated from Fredericksburg. Previously, since 1863 the group had met for Sunday school and operated a day school in “Jackson’s School House on Delaware Avenue and L Street, Southwest.”

Upon formally organizing as a church, the founding members set out to find a place to meet. Purchasing Simpson’s Feed Store, they remodel the building and open it for worship services following the war in 1867. Four years later the growing congregation constructs their first meeting house on the site of the old feed store, and in 1891 an addition is added. By this time, the church’s membership of some 2,300 persons make it the largest in the District of Columbia.

In 1962 a new sanctuary is completed on Blagden Avenue. The Zion Baptist Church of D.C. remains a vibrant and influential congregation in the 21st century.

Sources: John W. Cromwell, “The First Negro Churches in the District of Columbia,” Journal of Negro History 7, no.1, January 1922, p. 92, digitized by the Documenting the American South project of the University of North Carolina at Chapel Hill (link); “Our History,” Zion Baptist Church D.C. (link)