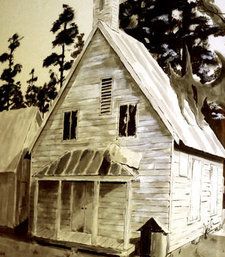 The Little River congregation is one of dozens, perhaps hundreds, of white churches whose members have the resources to resume services in Alabama this summer. Others are not so fortunate, having been permanently shuttered during the war.

Autonomous black Baptist churches, by way of contrast, have no post-war legacy. Many are founded as both churches and schools for freedmen. Those located in rural areas typically have few resources and struggle to get off the ground. Some established this summer meet in storefronts, boxcars, jail houses or outdoor brush arbors. Newly-established black churches in the cities often have more resources at their disposal.

White Baptists of the South, preferring to keep black members in their churches and thus under their control, offer no help to their black brethren and sisters who establish separate congregations. Baptists of the North provide assistance in many instances, but in some cases clashes of wills transpire, including in matters of titles to buildings and the manner in which the buildings should be utilized.