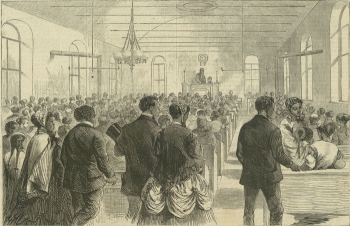 According to today’s Colored Tennessean newspaper, the convention called for final ratification of “the 13th National Amendment, as well as citizenship and black suffrage.”

One delegate, Sergeant Henry J. Maxwell (representing the Memphis 3rd LT. S. Colored Heavy Artillery, Company B), voiced the opinions of many present when he declared:

We shall be heard before the Congress and before the legislature. For
rights we labor; for them we will die. We have gained one — the
[Union army] uniform is its badge. We want two more boxes besides
the cartridge box — the ballot and the jury box. We shall gain them.

For the remainder of the year a struggle between the races in Tennessee transpires. Black citizens petition the state legislature, but to no avail, as conservative whites — Republicans, no less — ignore calls for racial equality.

In the meantime, “nightriders,” forerunners of the Ku Klux Klan, initiate a campaign of terror against black communities and white Tennesseans loyal to the United States government. The U.S. government responds by stationing more soldiers in Tennessee. When white state leaders still refuse to grant blacks full citizens rights, black leaders successfully petition the U.S. Congress to deny the state’s admission back into the Union.

The struggle goes on for years, with white supremacists’ tireless efforts, in the name of Christianity, ensuring that they will ultimately triumph over black attempts to obtain equal rights. During the long and daunting fight, Tennessee’s black churches serve as centers of faith, hope, perseverance and uplift.