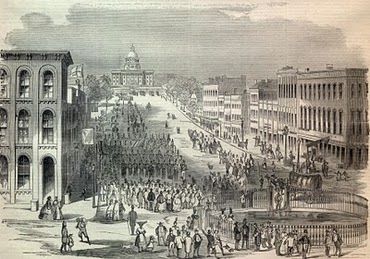 Today in Montgomery, Alabama an “old negro woman” enters one of city’s “principle churches,” walks down the church aisle, and sits down in a seat of her choice.

The woman, after all, is now free.

A white church member quickly intercedes, “politely” telling her that the church has “prepared another place for her to sit.” That “place?” The old slave gallery, still set aside for African Americans, even though the war is over, the white South defeated, and slavery no more.

A columnist in the Montgomery Daily Advertiser writes of this episode. Expressing shock that the unnamed colored woman “found a seat exactly suited to her mind” and “proposed herself to take possession,” he is relieved that she was directed to the slave gallery. “The old woman was hardly to blame,” the columnist asserts. “She knew no better and probably had been told that she was as good as the whites and entitled to as many privileges.”

This snapshot reflects the reality of race relations in many white Baptists churches in the post-war months. Angry that blacks are no longer enslaved, whites are determined to keep them in servitude, if they have anything to do with freedmen at all.

Not surprisingly, few African Americans have any interest in attending the white churches that for generations insisted the Bible demanded their enslavement. By the hundreds and even thousands, autonomous black congregations in the South are birthed in the months following the war.

One such congregation is the African American Cedar Grove Baptist Church of Satin Falls County, Texas, founded this day.

The church’s historical marker relates the story of the congregation:

Newly emancipated blacks assembled on August 20, 1865, to form a congregation at Col. Ruben Buhl’s plantation on the Brazos River (2 1/2 Mi. NE). The sixteen charter members named their fellowship Buhl’s Quarters Baptist Church and met in a log cabin with the Rev. Joe Moore as their fist pastor. The Brazos River area often flooded, and in 1885 the congregation moved one mile west to higher ground donated by Col. Edward J. Gurley. The frame building there was named Rock Dam Baptist Church after the new site. According to local tradition, members were called to regular and special services by a bugle blown by brother Mose Wells. In 1890 Col. Gurley gave the church a bell that announced activity at the site. In that year the church listed almost 100 members, and the name was changed to Cedar Grove Baptist Church after the venerable trees shading the sanctuary. By 1924 membership had grown to 250, due primarily to the influx of sharecroppers on the surrounding farmland. By the early 1940s, however, land around the church was being stripped for gravel beds. In 1945 the congregation acquired this site in Satin and built a new church in 1946 under the leadership of the Rev. Hogan Guy, still using the 1890 bell.

The African American Baptist experience in the post-war South is not only difficult in the months following the war, but for a century or more afterwards as white spite and hatred of blacks is expressed in intense persecution and a refusal to grant black citizens the equal rights that are guaranteed by United States laws.