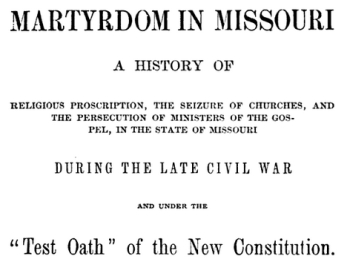 From Booneville, Missouri, the state’s General Association of Baptists, having re-affirmed their ties to the Southern Baptist Convention, formally protests the Test Oath of the new Missouri state constitution, of which ministers are required to sign.

The Test Oath is designed to assure the loyalty of Missouri’s citizens to the United States government, much to the dismay of Missourians who sided with the Confederacy during the war.

A large contingent of white Baptists number among the state’s former Confederates.

On the other hand, even some Unionists question the need for the need to sign such a comprehensive statement in order to retain the privilege of the vote.

“I _____ do solemnly swear, that I am well acquainted with the terms of the Third Section of the Second Article of the Constitution of the State of Missouri, adopted in the year 1865, and have carefully considered the same; that I have never, directly or indirectly, done any of the acts in said section specified; that I have always been truly and loyally on the side of the United States against all enemies thereof, foreign and domestic; that I will bear true faith and allegiance to the United States, and will support the Constitution and laws thereof, as the supreme law of the land, any law or ordinance of any State to the contrary notwithstanding; that I will to the best of my ability, protect and defend the Union of the United States, and not allow the same to be broken up and dissolved, or the Government thereof to be destroyed or overthrown, under any circumstances, if in my power to prevent it; that I will support the Constitution of the State of Missouri, and that I make this oath without any mental reservation or evasion, and hold it to be binding on me.”

“1. The oath is in conflict with the Constitution of the United States.

“2. It is unjust in its operations—punishing ministers for that which is no crime while other classes are not equally punished.”

“3. It proposes to punish ministers for that which is not, properly speaking, a crime at all.

“4. By taking this oath we would acknowledge an authority in the State which does not belong to it.

“5. In so doing we would place human authority above Divine, and thus condemn the examples given in the Scriptures and the great principles for which Baptists have contended and suffered in all governments wherever they have lived, from the Christian era down to the time of the American Revolution.”

The Test Oath is eventually overturned, much to the relief of many white Missourians.