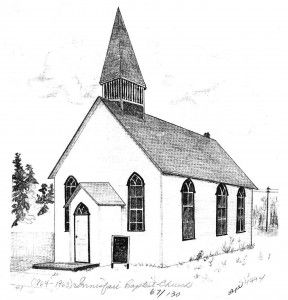 Although tens, perhaps hundreds, of thousands of former slaves who are Baptists have since left the white churches they were forced to attend and formed their own autonomous congregations, many remain in their old congregations. Those who remain do so because they have few resources and face an uncertain future, as white Southerners seem determined to keep them in some sort of servitude.

Black Baptists also struggle with their own personal identities. As slaves, they only had first names and were referred to in church records as the “property of” or “servant of” their owner (church records tended to avoid the word “slave,” preferring to sanitize the moniker). Now free, they begin adopting surnames. Some, sensing no other viable alternative, take the surname of their former owners. Others create new identities.

In the Blakely Baptist Church in Early County, Georgia, the dynamics of identity are evolving. A white-led church, the congregation yet consists of some black members. Today for the first time, church minutes identity a black person with a surname: “Judy Wade, colored, was received for baptism.” A few months later, another entry in the record book reads: “Received by letter, Bill, a colored brother formerly a servant of John T. Howard, now calling himself William Loving.”

Identity is important. African Americans, Baptists included, strive to re-create themselves in the immediate post-war years. A part of the re-creation process is the formation of autonomous black congregations.

For the black members of the Blakely Baptist Church, the separation takes place in 1868: “On motion of J. H. Wade a committee of three was appointed to confer privately with the colored members in regard to the propriety of building them a house of worship and organizing them a church of their own.” White members of the Blakely congregation, like many other churches, support the creation of a separate congregation in order to prevent black members from having too strong a voice in affairs of the church.