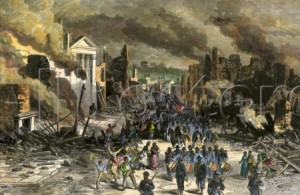 With the anniversary of Emancipation Day drawing nigh, the first since the end of the war, Southern whites in the region’s cities are on alert. A number of Christmas racial day riots in cities across the South have amplified fears that former slaves may cause trouble.

In Richmond, the former Confederate capital of which whites yet seethe over Union victory and the black troops who marched into the fallen city, white leaders take great pains to recast the Christmas riot in Alexandria, Virginia as a result of black aggression, rather than white bullying of former slaves. For the latter reason the rioting commenced, but a revisioning of the incident, originally published in the Baltimore Gazette and re-published this day in the Richmond Daily Dispatch, allows for the purging of white guilt.

“We are assured by a clergyman who was present at Alexandria when the negro riot took place there on Christmas day last, that the account which the Washington Chronicle gave of that bloody affray, so far as charging the blame upon young men who were formerly in the Confederate army is concerned, is entirely incorrect. Our informant furnishes us with the following, which he represents to be a true statement of the affair: The negroes commenced parading the streets on Sunday night. They were armed with pistols, knives and clubs, and marched to the beating of drums. They kept up this demonstration until Christmas morning. On Christmas day they insulted a number of white persons in various ways. They halted in front of several houses, uttering threats at the inmates, shouting at and cursing the inhabitants generally, and brandishing their knives and pistols. Finally these disgraceful scenes culminated in an attack upon a white man who was passing along the street. A general fight soon after ensued between the whites and blacks, which resulted in the killing of several persons, and among them a Mr. Mitchell, who belonged to the Second United States regiment of District of Columbia volunteers. Our informant states further that the white persons engaged in the riot were entirely of the class known as “loyal.””

The revisioning has just begun. White hatred of blacks, to be evidenced in countless acts of terrorism against African Americans over the next one hundred years, will systematically be cloaked by mythological history and smoothed over with a religious veneer. White Baptists are, and will remain, as guilty as anyone.