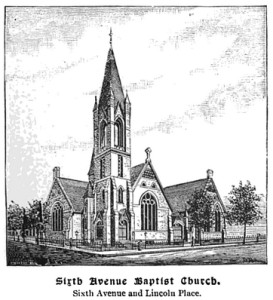 Today Sherman‘s force cross the Edisto River and into Orangeburg, a small contingent of Confederate defenders fleeing the city at the last minute.

For Sherman, Orangeburg is but a stop along the way to Columbia, the state capital. The small community of Pelion is situated between the two cities. Tonight Pelion’s citizens are warned that Sherman will arrive on the morrow. Some flee, others try to hide their valuables.

Many buildings are burned by Sherman’s troops as they march from Orangeburg toward Columbia. Among the destroyed structures is the Florence Baptist Church. The congregation rebuilds following the war.

Northward, far from the death and destruction of the battle front, Baptist congregations are faring better. Today a new Sabbath school is organized in Brooklyn, New York. Still in their early days, Sabbath (or Sunday) schools are not yet widely embraced by Baptists.

Nonetheless, Sabbath schools often prove to be effective means of starting new congregations. Such is the case with the school started today, which leads to the formation of the Sixth Avenue Baptist Church in 1872.