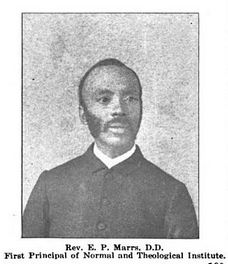 Elijah J. Marrs of Company L, 12th U.S. Colored Artillery, is keeping a written record of his time in the service.

Born a slave in January 1840 in Shelby County, Kentucky, in his youth Marrs converted to the Baptist faith, the denominational choice of most Christianized slaves in the South. Learning to read and write as a young man, in the fall of 1864 Marrs ran away and joined the Union Army. In addition to soldiering, in the intervening months the former slave has been teaching his fellow soldiers to read and write.

Only a few weeks ago did Marrs and his company experience their first enemy engagement. Marching through Kentucky in recent days, they became separated from the main part of their regiment. Yesterday at Big Springs the company camped out at the Baptist church, but soon were caught up in a fire fight with a Rebel contingent. Sporadic skirmishing continued through the night and into the present day.

Marrs recounts of this day:

The next night, Friday, January 6, 1865, we rested on our arms, but there was no one to molest us, and we who were on guard duty done our share of bragging over our previous night’s exploits. A deep snow had fallen during that day. I was again made Sergeant of the guard, with thirty men under my command. About midnight the rebels endeavored to steal upon our guards. On one of the beats was a soldier named Oglesby, who, as the rebels advanced, gave the alarm, and I quickly formed my men in line to repulse an attack. The guard informed me that one of the enemy had entered a little house in the neighborhood. I marched up in front of the door and opened fire on the rebel, when he broke and ran, succeeding in making his escape, though one of our boys informed me that when I fired upon the fleeing man, he jumped back twenty feet. On the same night Corporal Elijah Dagner and I heard the rebels talking in a grove near by, and creeping along by the side of a fence until within fair distance, we opened fire upon them, when they at once fled.

On Saturday, the 7th, the sun shone out brightly. We were engaged in talking over the best way to get back to our regiment in safety. We decided on enjoying ourselves, and visiting the outskirts of town we gathered up our chickens and turkeys and provided ourselves with a bountiful dinner and supper, which served to cheer us on our march. Saturday night we rested in peace, no one appearing to molest us.

Marrs is one of few few black Union troops able to write of his experiences. His journal provides a valuable recounting of military movements, enemy engagements and the soldier’s life from the perspective of a former slave.

Black soldiers prove to be a deciding factor in the freeing of remaining slaves in the South and the outcome of the war.

Following the war, Marrs becomes first a teacher and then, in 1873, a Baptist preacher. He is best remembered in the Baptist world as the first pastor of the Beargrass Baptist Church of Louisville, Kentucky.