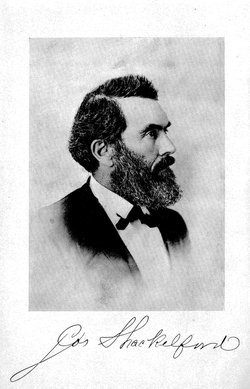 From the 1850s to the present he has pastored a number of churches in the Georgia, Tennessee and Alabama region, while also teaching at various small Baptist institutions.

He also served in two wars, the War with Mexico and the Civil War. Of the latter he enlisted in 1862 and was elected captain of a company of cavalry. After fighting for a year, he became a military chaplain, then returned home to Alabama before the war’s end in order to resume his work as an educator and minister.

Following the conclusion of the war, Shackelford tries his hand at a new endeavor: the newspaper business. Obtaining permission of federal authorities to start a Baptist newspaper in Moulton, he establishes The Christian Herald, serving as editor. Today is the issuing of the paper’s first edition.