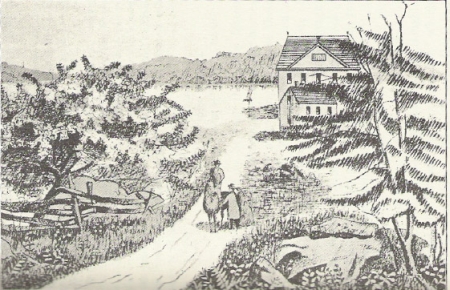 First Meeting House of the First Baptist Church of Boston

Today the First Baptist Church of Boston, Massachusetts celebrates its 200th anniversary history. Few Baptist churches yet existed in America when the Boston congregation was established in 1665.

The main speaker is pastor Rollin Heber Neale. To the Boston’s church early records Neale turns, quoting from the very first church record, upon the founding of the congregation.

In this record the first Baptists of Boston made it publicly known that they were not a part of the lineage of Anabaptists, a separate and earlier sect that also practiced believer’s baptism:

“The 28th of the third month, 1665, in Charlestown, Massachusetts, the Church of Christ, commonly, though falsely, called Anabaptists, were gathered together, and entered into fellowship and communion with each other ; engaging to walk together in all the appointments of their Lord and Master, the Lord Jesus Christ, as far as he should be pleased to make known his mind and will unto them, by his word and Spirit, and then were baptized, Thomas Gould, Thomas Osborne, Edward Drinker, John George — and joined with Eichard Goodall, William Turner, Eobert Lambert, Mary Goodall, and Mary Newell, who had walked in that order in Old England, and to whom God hath since joined Isaac Hull, John Farnham, Jacob Barney, John Russell, Jr., John Johnson, George Farley, Benjamin Sweetser, Mrs. Sweetser, and Ellis Callender, all before 1669.”

We have entered this temple to-day, with songs of thanksgiving, in order to celebrate an historical era, — the close of the second century of this church, the First Baptist Church of Boston, whose fortunes have been identified with the fortunes of that great Principle of Religious Liberty, which has not only survived the storms of fiery persecution, but has established its supremacy in the mind and heart of this nation, from sea to sea, over the breadth of the American continent.

Two hundred years ago, this church, consisting of ” a few, that is, eight persons,” so small, so weak, so destitute of every kind of power, except the indomitable power of Truth, was, with a single exception, the only organized body within the bounds of Massachusetts that stood forth as the Representative Witness of that far-reaching doctrine, now cherished as a sacred legacy in the homes of the millions, that “the Conscience of the individual should be free, and men should not be punished for worshipping God as they were persuaded he required.”….

Neale, in concluding his “Historical Address,” closes with a look at the present and future.

Brethren and Friends: We enter upon the third century of our existence in circumstances of unusual interest. Our beloved country, after passing through the fiery trial of civil war, now stands before the nations regenerated and free, with no chains for  human limbs, and no fetters for the human conscience ; no established church, and no dissenters ; no ” standing order,” and no schismatics ; no government emissaries, suspiciously prowling about the place of our religious assemblies ; nor any apprehensions  that the doors of the sanctuary will be again nailed up by order of the ” Great and General Court.” We have, I believe, the good will of our fellow-citizens, and, what is of great importance to a Christian church, “we are at peace among ourselves.” Our two hundredth anniversary finds us, also, enjoying a refreshing season from the presence of the Lord. While we are gratefully paying a deserved tribute to the memory of the fathers, the Lord our God is graciously permitting us to welcome our children and youth, the hope of Israel, to our bosom. While thus we hallow the past, we are cheered by the brightening future, and trust, that He who has led us thus far,

WILL CONTINUE HIS PRESENCE AND BLESSING TO THE END OF TIME.